An Interview with Ames and Jackie from Bachelor Pad 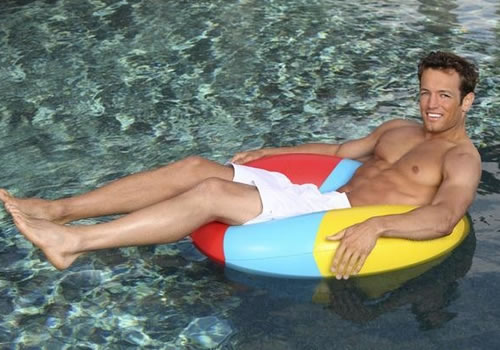 In what may have been one of the most romantic moments in reality TV in quite sometime when Ames Brown chose love over money in season two of Bachelor Pad. After just a few days in the house Brown had fallen head over heels for Jackie Gordon. When her fellow contestants sent her home, Brown momentarily looked like a little boy lost in a shopping mall before chasing down the limo and leaving the show with Gordon.

But alas, like most things in unscripted TV world, the fantasy was stronger than the reality. In a recent conference call interview, the couple admitted they are no longer together. Ames announced, "We had a great time on the show and chose love over money in the competition and so on. We’re not still dating, but we enjoyed every moment we had together."

On the highly charged season of Bachelor Pad, Jackie and Ames were the calm in the storm. There seemed to be almost a love at first sight moment and the pair quietly slipped off into discreet corners away from the drama to get to know each other better. Both players were surprised by how rapidly the spark grew. Jackie recalled, "Usually it doesn’t happen so fast. Certainly, I believe it was love at first sight, for me anyway… I shocked myself in my ability to fall so quickly, but Ames is a wonderful person and he made me feel very, very comfortable."

But their kind personalities were no match for the venomous duo in charge, Vienna and Kasey, who plotted Jackie's demise on the show. So when the rose ceremony came and his new love was eliminated, Ames paused for a moment as her limo drove away. He admitted, "It was pretty spur of the moment, but I never had any doubt and knew what I had to do. If there [was] any look of confusion on my face it was just how to physically engineer getting into the limo, because there are certain rules around the rose ceremony. But it was definitely the best thing I did at Bachelor Pad, and certainly the most rewarding, and I wouldn’t change it for anything."


Jackie was just as caught off guard as the viewers were by the turn of events at the ceremony. "It wasn’t so much a shock that I was eliminated that night. I knew that I haven’t really had my head in the game for quite some time since I found Ames and we started our relationship in the house. I was pretty surprised that he eliminated himself to accompany me in the limo. It was a pleasant surprise and he had not told me that he was going to do that, so it was a very sweet moment."

Still the couple revealed that they lasted only a few weeks after leaving the mansion. Neither would give specifics on what happened, but it was clearly Ames's decision to end the relationship. He stated, "We had an amazing time while we were together and just after a little while, split up. Nothing too exotic about it."

Jackie acknowledged that being in the mansion gives a relationship a fairytale spin and the real world makes things more difficult. "You don’t predict certain outside influences and things that can happen outside of your control once you get out of this very controlled environment." But she went on to say that she didn’t see it coming. "I personally was definitely shocked that it ended as it did. I was certainly not expecting that. I felt this was something that has potential forever, but with every relationship, nothing may be exactly perfect."

The only explanation Ames could offer was, "There’s nothing bad I could possibly say. She’s wonderful in every way. We’re just weren’t maybe the ideal match." Jackie added, "I’m not going to say I didn’t have my share of heartbreak, I certainly did. I have cried it out a lot, it’s been hard but you live and you learn and I’m glad that I loved."

Though the couple is still friendly and neither is currently dating, they have no plans for getting back together. When posed the question "is there any chance of reconciliation," Ames calmly replied, " I don’t think so."

See if any other coupes find love on Bachelor Pad on Monday nights at 8 p.m. EST/7 p.m. Central on ABC.

For related stories check out:
Justin Rego Would Rather Be in the Bachelor Pad
Jake Pavelka on Vienna, Gia and His Choice for the Next Bachelor