Mike Spiro and Samantha Woods Found Love in the Wild 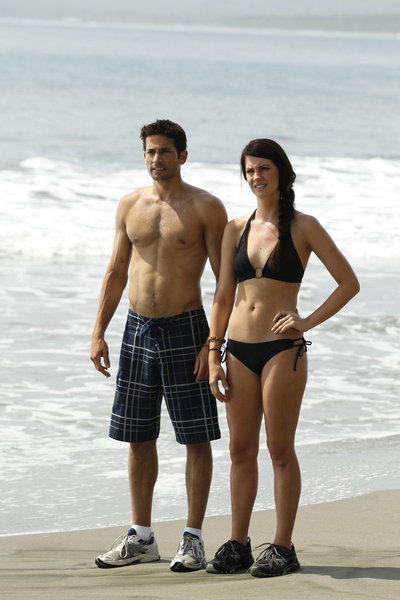 Last week Mike Spiro and Samantha Woods became the first couple to be named the winners of Love in the Wild. In a recent conference call they confirmed that they are still together after the show and talked about why they bonded so intensely on the series.

The Bachelor meets The Amazing Race competition show thrust couples into extreme tasks in the Costa Rican jungle. Mike explained how those trials were somewhat similar to the ones people face in real life relationships. “It’s interesting because you faced a lot of the same challenges in a regular day to day relationship, ‘Hey you made the wrong turn’ or ‘Hey you don’t know that it’s [10:00].’ Like it was the same things you argue about as a normal couple out in day to day life. The only difference being on the show is that it’s that much more stressful because it’s now a race element on top of all that. So yes, cuts to the core and really defines what kind of person you are [until you] tend to be in a relationship.”

Samantha added, “I felt like I really got to learn very quickly how he would deal with very high stress situations and things that would actually happen in everyday life outside of the jungle. And so we were really able to connect on that level very early on.”

Spiro described the intensity of the process, saying, “It’s like dating on steroids because you’re spending every single waking moment with that person and you’re competing on these adventures with that person. It’s a way to really cut to the core of who that person is and how they’re going to function in a normal relationship. So yes, it definitely was kind of a slingshot to get to this point.”

Mike put it into every day terms. “You think about it like a normal dating process, you’ll go on a date and maybe see each other a couple days later, go on another date, maybe there’s a few days in-between. So it’s just spread out over a longer period of time. Here it’s every day you’re completely saturated with the presence of that one person and you’ve got physically and mentally challenging adventures that you’re going on.”

And Samantha revealed that it forced some of a couples more embarrassing moments to the forefront more quickly. “He saw me without makeup on the first night that we hung out. That was just the nature of being there and being in a live-in situation. That’s not something you would really do on the first night that you’re dating someone.”

Spiro agreed that there no opportunity for pretense on the show. “A lot of times when you’re dating maybe some people put on a front, they try to impress the other person. You just don’t have time for that [on these] adventures. You’re trying to win and you’re trying to get it going.” Samantha chimed in, “Mud and all.”

In Mike’s mind that level of intimacy pushed some competitors too far. He recalled, “You just kind of take the dirt and the grime and you present yourself. And if they don’t like it then I think that’s why a lot of people quit.”

But Mike and Samantha toughed it out and made it to the finish line, winning a trip around the world and a chance at true love. They admitted that they are currently exploring a long distance relationship, and have gone so far as to meet each other’s folks even though they were supposed to keep their relationship a secret.

Spiro confessed, “I wouldn’t say we broke the rules. I’d say we bent the rules a little bit. But we made sure that NBC was aware of everything we were doing. We kept them in touch. It’s just too hard when you come out of Costa Rica and you’ve found this great new person and you want to start spending time with them to get to know them further and you’ve got these contract limitations. So NBC was pretty accommodating with that respect, and we’re able to make it through the between the lines in the contract.”

Now that they’re obligation-free, Mike and Samantha are on their own. Hopefully Love in the Wild will have a higher success rate than The Bachelor and they’ll live happily ever after.

Jeff Sutphen Talks About 101 Ways to Leave a Game Show


Cedric Entertains on It's Worth What?