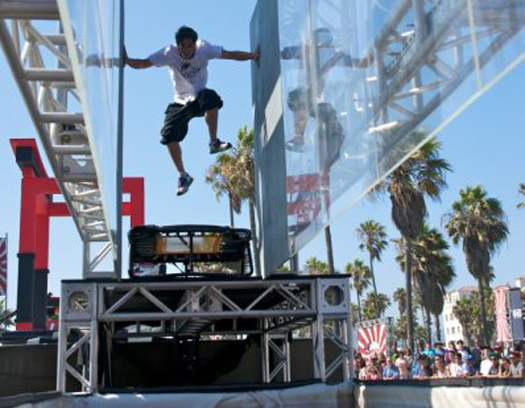 G4's American Ninja Warriors finale is on NBC tonight, as the remaining ten contenders head to Mt. Midoriyama, Japan to face the worlds' most challenging obstacle course. They are not only playing for the coveted title of Ninja Warrior, they are also vying for a $500,000 endorsement deal from K-Swiss. Making the stakes even higher is the fact that in 26 seasons, with over 2600 competitors, only three have ever completed the four-stage course. And no American has made it past the third stage. Hosts Matt Iseman (Sports Soup) and Jimmy Smith (MMA Fighter) talked about luck vs skill, how the show redefines success and the key to defeating the course.

On Luck vs. Skill in American Ninja Warrior
Matt: "Well I wouldn’t say it’s luck. If you look at the guys who move on, not many guys get through because of good luck. Some guys will go out because of bad luck. They may hit a spot where there’s some water from a previous competitor and slip and that’s just the nature of it. The course is not going to be the same every time you run it. The weather conditions change. There may be more dust on it. Something can change. So bad luck can take you out, but there’s no one getting through because of good luck."

On How the Show Redefines Success
Matt: "One of the things is, they’re not competing against each other. They’re competing against the course. They’re competing against themselves. That's why you do see such a camaraderie. This show is unlike most other shows where you know you’re going to see a winner… But this approach [is] the nobility of the quest, knowing it is almost insurmountable, this obstacle course. And it’s amazing to watch these guys push themselves… You get to know some of these people and you become invested in them. And you want these guys to do well… It’s unbelievable the dedication that they have. And so you really become invested in them and them doing well and them feeling like they’ve improved. Whether they win or not it’s that sense of improvement because ultimately it is so incredibly hard."


On Growing Attached to Competitors
Matt: "Last year we got to go to Japan and we took ten Americans there and we got attached to these guys. We got to know them. We spent a lot of time with them and they’re phenomenal guys. They really are humble, down to Earth great guys. This year when we were out in Venice watching the qualifying, we felt like nervous parents when some of them would step on the course because again we know how much they’ve put in. And I think that the show does a good job of letting people get to know these competitors and become invested in them. Some of the things that they’ve gone through in their lives, one of our contestants just faced an unbelievable tragedy and came out and still competed on the course. And it was just again, for a lighthearted show, a show that’s fun. It was one of those moments that was just touching. And to see the triumph of the human spirit that these guys have, the dedication it was a lot of fun."

Jimmy: "When you see David Campbell, Brian Orosco, all the guys they had last year, get to stage three, that’s one stage away. So it may start off when you get there as, 'Oh this is unattainable. There’s no way they can do this.' Matt and I see the athlete’s start realizing the dream. They start seeing it get closer as they complete parts of the course. And that’s when you get so personally invested. It’s a big difference between this and other shows that involve the obstacles. It’s not fun to watch them fall. It’s not great to see people wipe out. That’s not the whole point. The point is you feel horrible when these guys fall. You feel terrible. You want them to succeed so badly. And that’s a big part of the hook. You really get invested in these guys and you want to see them do well."

On The Key to Defeating the Course
Matt: "Having seen these guys in Venice, having seen them at boot camp and see them training even outside when we’ve gotten to know these guys, the reality is we know for the most part they are physically capable of getting through every obstacle. But that is the challenge. It’s doing them all on a single day and doing them when the conditions vary and doing them when you’re fatigued. And it is just this feeling of they can do this. They but you just have no room for any mental lapse. If you’re not physically prepared, if you haven’t gotten the good night sleep, that can be the difference. And it’s just so frustrating when you realize that there’s just no room for error. But that’s what makes it great is nobody is going to luck into this. If you do this course it is because you have put in hours, months, years or hard work and you were unbelievably focused."

On Women Defeating the Course
Matt: "We’ve had some log rolling champions. We’ve had gymnastic champions come out and they’re getting closer. I thought this year we had a couple who made it, who just had a couple lapses. And again it’s tough. But I think we’re close to getting a woman through. And what’s amazing is even versus last year how many more women are getting into this… And there’s huge pride in that. The Ninja Warrior forums, the online fan base for this show is rabid. It’s phenomenal. And the women who go up there know they have to bring their A game in because they’re representing their gender."

On the Rabid Fan Base
Matt: "In Japan we have many more fans who come out in America. Our course was open. In Japan, Mount Midoriyama is actually located in this field outside of Tokyo near a television studio so the access is actually controlled. So they’re very selective on the people who come out. But the ones both in Japan and in America, the people who come out, the fans are like the Raider’s fans. They’re fanatical. They’re nuts, a little, not scary, but I just wouldn’t want to have them angry at me."

Jimmy: "The fans are totally nuts. And it’s funny because in Japan they have a PA system when people are running the announcer is charging them up and he’s telling them to cheer at certain times and he’s really hyping up the people in Japanese. We have no idea what they’re saying. But there’s a synergy between the fans and the event itself because they’re going cheer for so and so and they go totally nuts... The crowd is really part of the event."

See who is victorious over the Sasuke course during the American Ninja Warrior finale tonight at 9 p.m. EST/8 p.m. Central on NBC.

For related stories check out:
Jeff Sutphen Talks About 101 Ways to Leave a Game Show
Cedric Entertains on It's Worth What?