Some thoughts from The Glee Project's Marissa von Bleicken 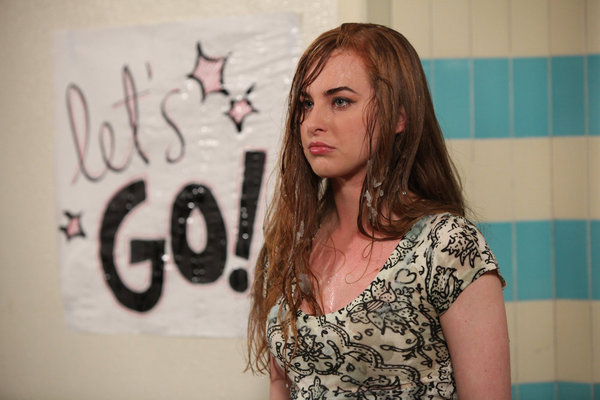 Marissa von Bleicken was sent home from The Glee Project after a week of highs and lows. She won her second straight Homework Challenge when Max Adler, Glee's Dave Karofksy, picked hers as the best display of tenacity during the group's performance of La Roux's "Bulletporoof." Then she got one-on-one time with the actor and a featured role in the video of the "Under Pressure"/"Ice, Ice Baby" mash-up. But her inability to retain her spark while being submerged in cup after cup a frozen slushies landed her in the bottom three. And when her biggest competitor Alex came out in drag and sang "I'm not Going" from Dreamgirls like nobody's business, her chance of staying slipped away. Her are a few thoughts from Marissa from a recent conference call interview on who she wants to win, if she regrets telling Nikki she didn’t practice and her struggles with anorexia.

On Telling Vocal Coach Nikki Anders that She Didn’t Practice
"I regret the wording of it a little bit. I hadn't intended for her to think that I was slacking or I wasn't practicing in any way, because throughout the competition I never ever let myself slack — even if felt comfortable. What it was, was that I did have extra parts from being the homework winner. And I put a lot of my time and energy focusing on certain parts that I thought would be a greater challenge to me than others and consequently overlooked some things accidentally. I didn't mean to come off as if I hadn't practiced, definitely."

On Lyndsay Copying Her Kiss in the Pairability Challenge
"Well at first watching the monitor I was a little surprised and I felt like it was a little bit of a discredit to our kiss and it wasn't as special anymore. But a lot of us were directed to do that anyway, to bring out the chemistry as much as possible, so I wasn't too upset about what transpired."


On Growing Up in an Entertainment Family
"I grew up in a very theatrical environment. My dad [Eric von Bleicken] was an opera singer at Lincoln Center. New York City of course is full of theater people. So I've always been artistically oriented and interested in performing. My family ended up moving to a small town in Massachusetts for high school. And there of course, I had a real life Glee experience where the music department, the music kids, were the first people to accept me into their midst. And I think that's really where I started blossoming as a performer. I had dance training. I did a commercial, off Broadway shows here and there, not a tremendous amount of experience prior to The Glee Project but definitely enough to keep me wanting to work at it."

On Her Struggles with Anorexia Revealed During Vulnerability Week
"It was one of the most difficult decisions I've ever had to make, definitely. Anybody who knows me knows how reserved I am, and private with my personal issues. And finally getting the courage to admit — just even to myself — was a big step. [Revealing] that I'd had problems in the past with body image and how I was treating myself as a consequence of that. That was a really huge step for me. None of my friends or family knew. And so after I did it, I felt relieved and also nervous about when it was going to air. I was an absolute wreck. And I had to prepare my friends and family beforehand. But I think it worked out all right. People have been amazingly supportive and they've written to me and told me some of their own personal stories and struggles. And that's meant more to me than anything, that I've been able to inspire others to get help."

On Who She Wants To Win
"Any of the other contenders are equally as deserving and talented, but I've always had a special love for Hannah and Alex. We were the closest on the show. So either one of them winning would mean a lot to me, I think they both represent what Glee is all about."

On What She Learned About Herself Doing the Show
"I learned that I can do it. I always thought I'd be too shy to really put myself out there or do anything in this caliber at all. But I made it pretty far and I'm proud of my work through the duration of it. So I guess [now] I know that I can."

Tune in to The Glee Project on Sunday nights at 9 p.m. EST/8 p.m. Central on Oxygen.