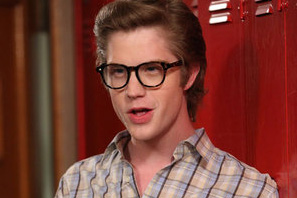 A Glee hopeful stands up for his convictions, an actor sets sail for a good cause and a new director is honored in Bosnia. Here's this week's most inspirational moments in pop culture.

Cameron Mitchell Chooses His Beliefs Over Fame on The Glee Project

It’s not easy for anyone to walk away from their big break in Hollywood but that’s just what Cameron Mitchell did this week on The Glee Project. The 21-year-old singer-songwriter has been struggling with how to maintain his own morale values in the midst of certain requests during challenges. Not that he was asked to do anything all that racy, but even kissing a girl led to a tearful Cameron calling home to his mother.

So on the most recent episode when Mitchell found himself in the bottom three, he asked Glee creator Ryan Murphy to send him home. In a shocking twist, the big name producer actually made a personal plea for the young contestant to stick around. But Mitchell had already made up his mind.

In a recent conference call interview he recounted, “I always knew obviously that I did have strong beliefs, and I had strong convictions. And I knew that there were going to be moments and times where that was going to be tested. But I thought everything would be okay. But  as I went through the show and the weeks passed, and  the things like the kissing thing happened I knew that I was going to stand firm to my beliefs no matter what.”

When push came to shove the potential winner of a seven episode story arc on Glee followed his heart. Mitchell confessed, “In the end it definitely was a decision because of what I believe in and because of how I want to portray myself as and just the lines that I want to draw.”

The choice might pay off for Mitchell, since leaving the show his debut EP has been rising up the iTunes charts. See who wins The Glee Project when the show airs on Sunday nights at 9 p.m. EST/8 p.m. Central on Oxygen.