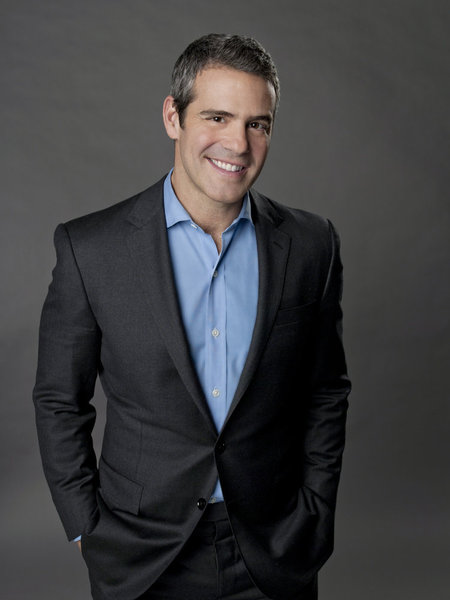 Tonight Bravo programming guru Andy Cohen will leave the Real Housewives behind in search of the next Miss Universe. In a recent conference call interview Cohen and former-Miss USA Shandi Finnessey, talked about the main event in Sao Paolo, Brazil.

When asked if he’d be giddy during his Miss Universe experience, Cohen gushed, “Absolutely. I’m always giddy. I think I probably will be. I’m going to be very excited to be in Brazil and to be presiding over this sumptuous pageant.”

He didn’t feel he was in the position to offer any advice to the contestants. “Oh my Lord. I couldn’t offer them tips. They already look great… They need to just bring it and that final question is the defining moment really. And so they already know how to walk and model and strut, but that final question they have to be smart and sharp.”

Finnessey disagreed, “I don’t think personally that the final question matters too much. Because by that point you’ve already seen the girl compete in so many different phases of competition that you already know who probably could handle the job of being Miss Universe to the best of their ability. And the final question personally only comes into play when you’re really torn between two girls. Obviously if one girl completely flubs the last question then she could fall on her ranking, but otherwise I don’t think it weighs as much as what people think.”

She also looked ahead at the type of questions that the contestants might be asked, “The past few years we’ve been on a trend of just really tough, shocker questions, which I think is really great though because it shows a lot of people say, ‘Oh, Miss USA, that’s just pretty girls like Miss America’s the one with the substance.’ And it’s great to show [them] wrong, like the Miss USA girls and Miss Universe girls, we not only look amazing in the swimsuit and gown but we can we have a brain to go along with it and we are college educated.”

Finnessey added, “So it’s all over the board. It’s everything from just shocking questions, political questions, the faux pas questions that no one wants to even really talk about. It’s just all over the board and that’s actually become one of the more interesting parts of the pageant now to watch because we’ve seen kind of the mix-ups that have happened in the past. And we’ve heard the South Carolina answer and then the Carrie Prejean answer so it’s going to be really interesting to see what the girls say.”

Cohen agreed, “I echo the sentiment. I love the tough questions. I thought the questions at Miss USA were fantastic about legalization of marijuana… Ultimately Miss California won Miss USA and she was asked that question.”

He continued, “I loved the question about religion. I think it’s interesting to hear what these women have to say about real issues that people are talking about… It seemed to me just as a viewer and I’m not a judge… but it just seemed to me standing there, ‘Wow, this would change my impression of someone now that I’ve heard them speak. This could make me turn on someone quickly.”

And Cohen plans to bring that excitement to the show. “Hopefully we’ll be having a lot of fun and we can be a little irreverent and have fun with it and shake it up a little bit. It’s an unpredictable night.”

Catch the Miss Universe Pageant tonight at 9 p.m. EST/8 p.m. Central on NBC.
Posted by Pop Culture Passionistas at 2:00 AM