The Pop Culture Passionistas at the 2011 Creative Arts Emmys 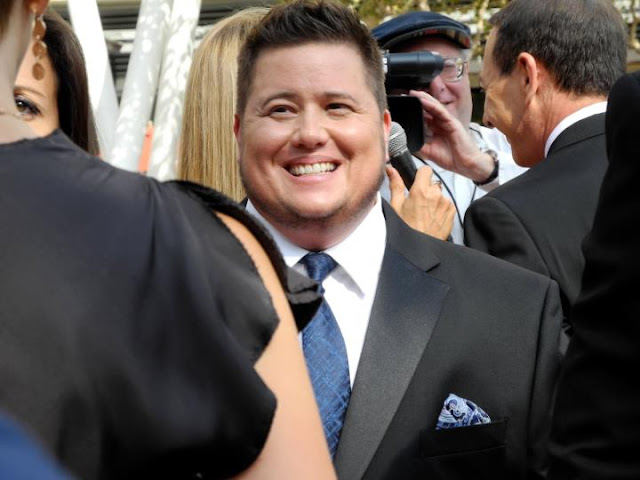 It's the most wonderful time of the year. For two glorious weekends we spend time with those who mattered most to us throughout the past twelve months. We get to enjoy great food and are showered with gifts. No, don’t worry, you haven’t slept through the holidays. We're talking about Emmy season.

To the Pop Culture Passionistas, there's nothing better than being on the red carpet with our favorite TV actors, delighting in a delicious meal with friends at the Governor's Ball and getting the greatest gift of all, countless star spottings all day long.

And thanks to our good friends at the Archive of American Television, who asked us to cover the event for them, the sightings at the 2011 Creative Arts Emmys on Saturday, September 10, started right away. No sooner had we pulled into the parking garage at the Nokia Center than what to our wondering eyes should appear but a shock of bright pink hair — Kent and Vyxsin from The Amazing Race. Visions of magenta and black danced in our heads as Vyxsin embraced us and covered us with magic sparkly dust to ensure a happy day at the Creative Arts Emmys.

As we progressed towards the red carpet we found ourselves following three wise men (okay, it was two men and one woman, but go with it.) They were carrying suitcases made of precious metals containing the coveted television secrets that only they knew. It was the representatives from Ernst and Young bringing the Envelopes to the ceremony.

We then shared the red carpet with old friends like Debbie Reynolds and Carrie Fisher who strolled along holding hands in a tender mother/daughter moment. Kathy Griffin and Pee Wee Herman (aka Paul Reubens) embraced amidst a media frenzy. And our old pal Chaz Bono stood tall and proud after finding himself in the spotlight, first with his doc for the Oprah Winfrey Network and now for joining Dancing with the Stars.

Downstairs in the pressroom, was the quiet before the storm of the party. Sadly, several of the winners did not show up to get their awards. Gwenyth Paltrow, who won for Best Guest Actress on Glee, and Justin Timberlake, who won two awards for Saturday Night Live (Guest Actor and Original Music and Lyrics) were no shows.

We were also disappointed that Jeff Probst did not make his way down to the pressroom after winning Outstanding Reality Host for the fourth straight year. He was jetting off to some exotic locale right after the taping, no doubt.

But we did get to speak to Loretta Devine who took the statue for Guest Actress in a Drama Series for her work on Grey’s Anatomy and Paul McCrane who won the male equivalent for Harry's Law. John Walsh also made an appearance in the pressroom after being given the Governors Award for his commitment helping to find missing children and fighting crime for almost 25 year on America's Most Wanted.

Without a doubt the highlight backstage was Seth Myers. He beat out fellow SNL music comedy duo Andy Samberg and Akiva Schaffer to win the Emmy for original music and lyrics for Justin Timberlake’s monologue song. When asked where he would keep his statue, Seth replied, "I'm going to put it somewhere where Andy Samberg can see it."

When the ceremony was over and the last winner had walked through the pressroom, we headed over to the Governor's Ball. The LA Convention Center was transformed into a Cirque du Soliel-style extravaganza. As we made our way through the hall to find our table, we were greeted by several mimes (kind of scary, but they fit the theme). And then after a most delicious dinner we were entertained by acrobats and enthralled by the four-story human bubble-blower over the bar.

But there was one moment that stood out above the rest. It was the sweetest gift of all, an Emmy-miracle, the icing on the statue, the piece de resistance. As we wondered the room looking for celebs, we spotted Cloris Leachman. She was off in a quiet corner doing an interpretative dance with a black and white checked body suit-clad acrobat/mime/dancer. The evening was now complete. It was time to go home and dream of the happenings to come during the Primetime Emmys next weekend.

To see all out photos from the Creative Arts Emmys, check out our Facebook album.