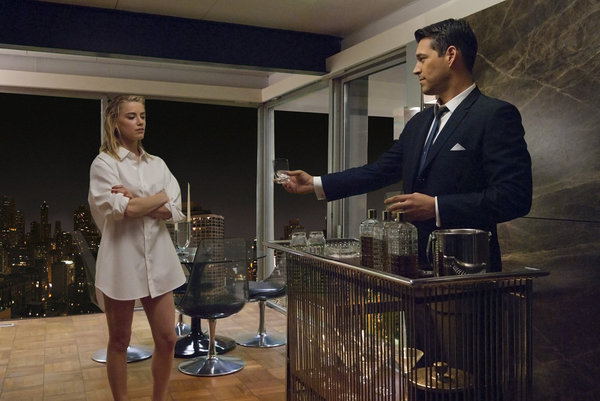 One of the new fall shows we're looking forward to is The Playboy Club. We are big fans of Mad Men, and all things retro, and this show seems like that AMC hit but with one special addition — music. We recently learned in a conference call interview with stars Eddie Cibrian and Amber Heard, that every episode contains a production number. A '60s drama with music? Sign us up!

Amber stated, "We've got music, we've got dancing, we've got performances, we've got spotlights and fishnets and lipstick and jazz and martinis and what more could you want? It's a lot of fun."

Eddie added, "There's a lot of musical elements to the show too so we basically almost shoot a complete music video every episode along with a one-hour drama which that in itself is very time consuming."

The actress also described the dancing on the show. "We have this wonderful choreographer, a very accomplished choreographer works with us and our show. Her name is Fatima Robinson. And she is an unbelievable choreographer and she's taught us the specific '60s style dancing, which is important because as bunnies they were in many ways trendsetters… And so we have very specific dance numbers and we also have more elaborate choreographed pieces and then we have more '60s freestyle dancing. So it keeps us busy."

And aside from the just the singing and dancing, the series recreates a very specific era, which Eddie claimed is an extra layer added to the process which makes it difficult but enjoyable. "It's not always as easy as it would seem to other people. But we're getting into a really good groove right now. We're all having fun and it's coming on the set and seeing that these extraordinary set pieces that our production designer built. And basically feeling transformed when you enter those scenes… And then you have these performance pieces that we're doing. And you forget about time and you get transformed into this world. And it makes it nice for us because you do have fun."


He continued, "Every time we go out on location as well we got to bring in the old cars, we've got to bring in all this stuff that's period-specific to that time. So it's a little different than just a normal procedural cop show that gets show in eight days as well."

Amber reflected on why the time period is important to the show. "It took place on the cusp of all of these changes and revolutions and women's lib and the Civil Rights revolution. And because it takes place at that time we have an unbelievable platform on which we can tell our story. Women stepping out and deciding for themselves how they wanted to earn their money, if they wanted to earn money, that's an important part of what we know now to be women's lib."

She added, "Women deciding for themselves how they wanted to conduct their lives and how they wanted to express their sexuality is nothing but those women's choices. It's important that they were brave enough to step out and say, 'This is what I want to do with my life for right now and I'm going to challenge the status quo and challenge the social norms and do it my way.' And we saw that that's exactly what these women did. And many of them went on to become CEOs and entrepreneurs.

She explained, "We've met and talked to so many ex-Bunnies that talk so fondly about their experiences as Bunnies and are happy to have been a part of this process and happy to be trendsetters and happy to have pushed the envelope and done something that they felt benefited them in the long run and in the short run as well."

For related stories check out:
An Interview with TV Legend Alan Alda
Our 2010 Top 10 Musical Moments on TV