Eva Longoria Gives a Sneak Peak at The Alma Awards 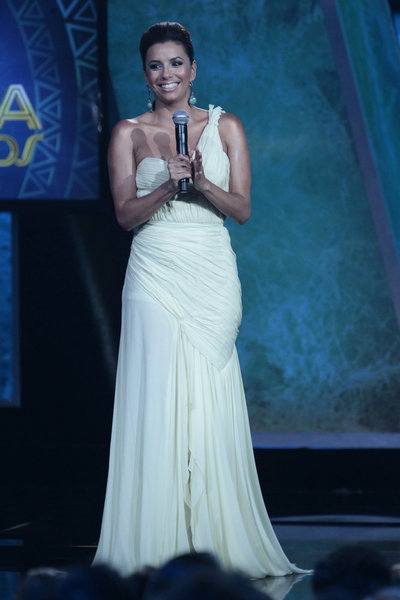 Photo by Chris Haston/NBC
This Friday night Eva Longoria is not only co-hosting The NCLR Alma Awards but she’s been acting as co-executive producer for the event as well. In a recent conference call interview, the Desperate Housewives star talked about the night that honors the best in Latino entertainment.

Eva explained how the categories for the awards are chosen. She admitted, “It’s a hard process because we want enough time to honor everybody but at the same time we do have a pre-show. So we still have all the categories, we have a pre-show and then we have the on-air show. And also every year there just seems to be a heavier category than others. And so usually depending on the amount of nominees and the amount of people that actually service the categories, then that’s pretty much how we make the decision on what’s going to make the final.”

She pointed to a couple of fields that were really difficult to pin down this year. “We’ve had a great musical year with Pitbull and Enrique Iglesias and Demi Lovato and Shakira. Everybody had such great music this year. So we’re hoping to be able to reflect that in the musical categories.”

Eva continued, “We had so many people on television and even with the hosting categories like Jennifer Lopez on ‘American Idol,’ Christina Aguilera on ‘The Voice,’ George Lopez on his late night show. So we were really represented in the hosting TV personality category as well. But we’re really always excited when every category is just extremely full. And it’s such a reflection of what is happening in television and film and music within our community.”

Making sure that some of those people show up for the special is high on Eva’s list of producing duties. “Every year it’s talent, it’s booking the show whether it’s the musical performances or the presenters or the nominees and/or winners. And so that’s always a big priority for us because we always like to do it in Hispanic Heritage Month. We like to kick off Hispanic Heritage Month by honoring the Hispanics in the media and sometimes that proves to be difficult because everybody is working in September. Every television show is working, people are working on movies, people are out of town, people are on tour in the fall.”

She added, “That’s probably our main priority is the talent because we want to be sure to reflect the year’s successes and celebrate and honor those people. So that’s always probably the priority as a producer. And we do our weekly conference calls and meetings and daily emails back and forth with confirmations and asks that are out and it’s just never-ending until we are there in the show taping.”

Jake Pavelka on Vienna, Gia and His Choice for the Next Bachelor