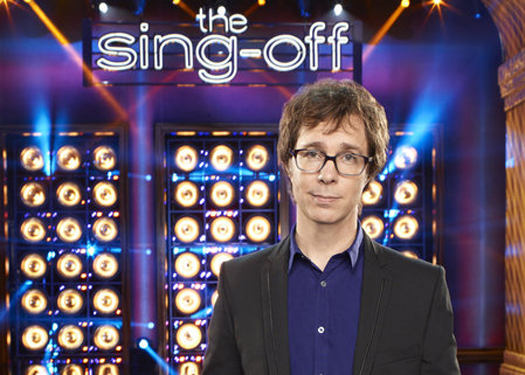 We're excited that The Sing-Off is returning next week. And we're looking forward to the changes they have in store. Sara Bareilles is joining Ben Folds and Shawn Stockman at the judge's table after Nicole Scherzinger was courted away by Simon Cowell for X Factor. And this season we have 16 glorious groups to enjoy in the search for the next great a cappella act. We spoke with Ben Folds on a recent conference call about the differences this season and why he thinks the show is so popular.

On What's New This Season
"This is the season of innovation... As it evolves I think everyone will see the innovation be second nature. In other words, you begin to take it for granted and everyone will look for heart. But that's what marks this season and my theory is because these groups watched this television show and they thought, 'What can I do to stand out?' And so we have a lot of standout groups... The first season was much more sort of conventional a cappella and they were very good. Second season more of that. And now all of a sudden it's more about how they can stand out and be different and that's a nice thing to see."

On Repeat Contestants
"They slip by putting mustaches on. We only figured it out after they got in. They were strangely attractive with the mustaches. We do encourage it. We do encourage it because it's about groups working together and it encourage the whole development and this show has become a hub of talent. Now you see these people getting together and making bands, rising together, doing things. It's an incredible amount of talent.... One fellow you'll see on this season in the Dartmouth Aires, he said he never thought about being a musician. Now we've completely corrupted the poor young man. He's going to be a musician. Now he's going to starve."

On the Biggest Challenge for the Competitors
"It's different for every group. That's what's interesting about it ,is the story behind every group. If you have an obvious one, which is being surmounted like really effectively, is an all female group. You don't have a bass. So if you're an all female group, you've got to find ways of making it work, and there are plenty of ways, but you have to find them. They're off the beaten path. And if you're a group of 18 guys then you might have intimacy issues. It might be difficult to find a star, a one-person that can act in the middle of essentially a football team. Some people might be technically challenged but have total star power. So for each group it's how they surmount their challenge and their difficulties. It's their Achilles heel. It's interesting for us to watch. Sometimes you keep a group in because you can see that they're on the verge of a revelation. And they may not have done their best show but we make the judgment that if they stay on another show we're going to see something that's going to develop and it's going to surprise us and that is what I think is most exciting about the show."


On Why the Show is Popular
"I think the show is successful because, one, because there is a lot of talent on it. The singers, even the ones that go home early in the seasons, they're really talented and they're really dedicated and they're all singing together really well. It makes people feel really good to see people working together... You can tune into television everywhere else and see people not getting along or people not working together well or something that's really not that artfully put together. The show doesn't have to be artfully put together. As soon as those kids walk on the stage, and sometimes not kids, and sing together, but it's not just a lot of work. There's really a lot of art and craft in that and it's counter to what we're told about our culture now, that everything is dumbed down, that everything is all reality shows and off the cuff and just dumb. And that's the way I think people feel about the way things are going. If you look at groups sometimes, high school kids, and they're doing this amazing thing and you think, 'Oh, it's going to be okay.' And that's what you get for a couple hours of The Sing-Off. Then you can go back to kicking each others' asses and that's fine, too. I like to see some ass kicking myself. But for a couple hours it's nice to see some harmony and I think that's what this show provides."

On How Simon Cowell and Glee Influence the Show
"I haven't seen Glee yet. I saw about a five-minute clip of American Idol because people kept on asking about Simon Cowell, so I wanted to see what he did. And I will watch Glee. I'm not proud of being ignorant. Stopping to watch TV is not something I normally do. But I'll get to it... [Simon]'s great. He's a bit of a genius for having been one of the [innovators]. When you look at 21st Century popular music history, he'll be a very important part of how the music industry, how the filters of the music industry, how people hear music and how it's integrated into the rest of the popular culture. He's got a whole chapter.

"But I also think that this world that he's created is not what we really do. We live in the form. But that form has probably gone back to The Gong Show and Star Search. It's been done before but the form that we do, the current form, I think he partially invented that. But we're really very different because the show itself, the heart of the show is about harmony. And I think that's really what lights up when you see [it].

"We might have a lot in common with Glee. I don't know. I haven't seen it yet. I know that people singing together has become more and more popular over the 20th Century until now it's really reaching a boil. There were a cappella groups in universities and small numbers at the turn of the century, the 20th Century. And by the end, there is six, eight groups at every university. That's a lot of students singing all of their own motivation. And so I think some of these shows are just springing out of a cultural versioning of vocal music. And if you think about it, it's very timely because we're not going to be able to afford instruments pretty soon if the economy keeps going that way and you can always afford your voice."

On the Show's Positive Impact on Education
"It's one of the main reasons that I got into the show. If you're a professional musician or if you're a musician especially the era that I group up in, we were lucky enough to have music programs. And I've got kids now and I can see that it's been slashed. So the way I got into this show was doing an a cappella record with university a cappella groups and the money went to music education charities. And what I think is great about the show — I can't tell you about a specific affect it might have had — but what you're seeing is that despite the cut, the de-emphasis of music in schools, you're seeing an increased number of kids getting together on their own dime, on their own time with absolutely no class credit in universities. It's becoming a big social thing, but it's easier to just get together and drink. It's more than just a social occasion. They're having to learn harmony and voice leading and they have various levels of education understanding. But by the time they put themselves through this they really know the insides of harmony. In some ways it's like studying Bach Fugues because every person has to be really aware of what their specific voice leading is. So it's a lot of music education... I feel like it's part of a movement that it's basically our culture saying, 'Actually, music is very important and we're going to do it even if it's not in the school system.'"

For related stories check out:
Nick Lachey Gives Props to "The Sing-Off" Judges
The Sing Off Is Casting Season Three