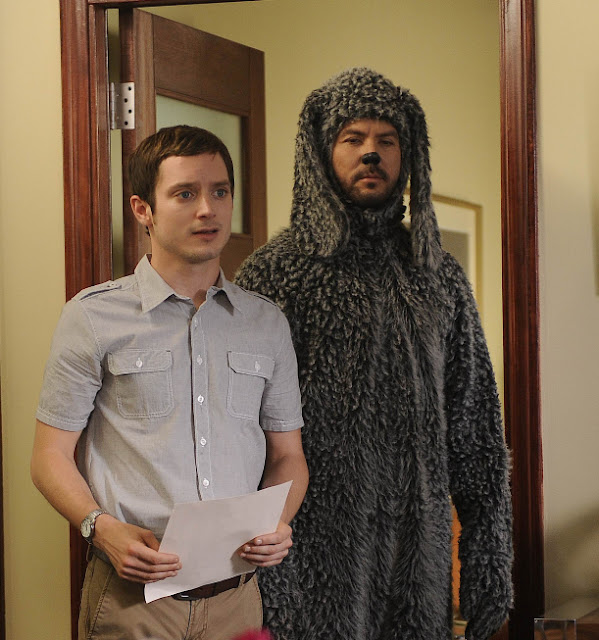 It’s not easy for a new TV show to create a classic episode that not only imparts key information but is endlessly entertaining. The geniuses behind Wilfred did just that recently. In an episode entitled “Compassion,” fans met Ryan’s mother played by Mary Steenbergen. In a recent conference call interview series stars Elijah Wood and Jason Gann talked about the pivotal show.

Wood, who plays Ryan, recalled, “Actually that was one of the more enjoyable experiences working on that particular episode, made all the more special because of Mary. She was truly extraordinary and brought such a beautiful energy to the set. We only worked with her for four days, but we felt this great loss when she left us. It was kind of amazing.”

The man in the dog suit and series creator Gann added, “Yes, and I got to make out with Mary.” To which Wood replied, “You did. By the way, I just recently saw that episode. Damn, I forgot how much you actually made out with her.”

Gann continued, “I was so excited about making out with Ted Danson’s missus. It kind of overshadowed the rest of the episode for me. We shot a number of takes of that kissing scene and we thought we had it and I said, ‘Yes, I think we’ve got it’ and I went into the room where the showrunner and the director were, Randall [Einhorn] and David [Zuckerman], and I said, ‘Did you see my tongue go in?’ They were like, ‘Yes, we know it went in.’ ‘But did you see it go in?’ They were like, ‘You can tell it’s in.’ I’m like, ‘But did you see it?’ They said they didn’t see it go in. I said, ‘Give me one more.’”


Gann further recalled, “I went back out and I said, ‘We’ll do one more.’ I made it get the tongue right in there and then I said to Mary, ‘Look, I’m sorry about that.’ She was like, ‘What are you sorry for, it’s the most fun I’ve had in ages.’ It was a lot of fun. She was a really good sport. We have to bring her back. We really want to see that character again.”

Wood appreciated that the episode explored some of the potential mental issues with his role. He acknowledged, “It was a great episode, too, in the sense that it explored some of the psychological background to the Ryan character and developing his back story a little bit as well — an interesting multi-layered episode that I think we’re really proud of.”

The thoughtful remark caused Gann to note, “I’m not really proud of my last comment. Now that I’ve heard Elijah’s really intelligent answer to that, all I talked about is making out.”

Wood defended Gann’s comments, saying, “But look, ultimately the make out is a stellar, very important piece to the puzzle that we created.” Gann jumped back on his own bandwagon, “Well, yes, yes. Thank you, thank you. It is, and it’s also like the humanizing of behavior and I’ve seen dogs just get their tongue right in the mouths of humans.”

One other key element to the “Compassion” episode dealt with the fact that Ryan’s mother has a pet cat, who is a human in a furry suit, just like Wilfred — who happened to be portrayed by Rhea Pearlman. Wood doesn’t want to read too much into that revelation. He admitted, “I don’t know that I want to believe that that moment at the end of the mother episode answers all of the questions, either. I think if anything, it indicates that Ryan and his mother are certainly cut from the same cloth. And potentially it indicates that there’s a history of mental illness that may have been passed down.”

He commented that he feels the incident leads to deeper reflection. “It provides yet another question. But it certainly indicates that there’s a similarity between the two. I love that moment. I thought that was really quite brilliant, including another vision. I thought that was wonderful.”

Fans can look forward to getting a glimpse of Ryan’s other parent when the show returns. Gann explained, “We met the mom in season one and we’re really excited about going into the dad in two. Because it’s been touched on a number of times that Ryan was pushed into a certain direction by his father. And we’ve alluded to that. But I think that once we get to know the dad, it may shed new light on the mother.”

For now viewers will just have to catch the season finale with a promised cliffhanger ending. Wilfred airs on Thursdays at 10 p.m. EST/9 p.m. Central on FX.

Elijah Wood Talks to a Dude in a Dog Suit