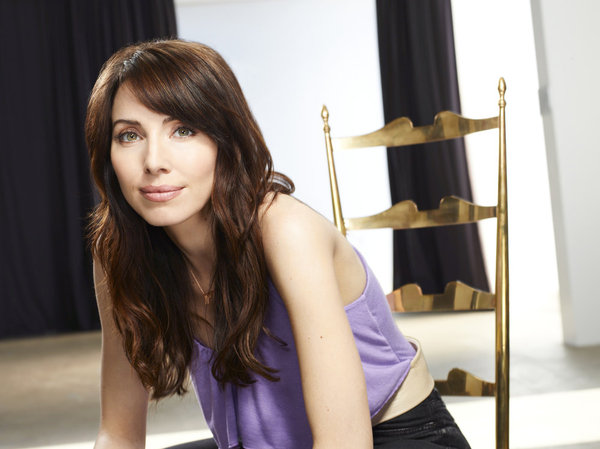 Whitney Cummings is a very busy woman these days. She is the star, creator, writer and executive producer of Whitney, the new TV show which premieres on Thursday, September 22 on NBC. And if that doesn’t sound tiring enough, she is also the co-creator  and co-executive producer of Two Broke Girls alongside Michael Patrick King, the brains behind Sex and the City.

Whitney started her career as a stand-up comic, which lead to TV gigs like regular appearances on Chelsea Lately and movie parts like Maid of Honor. In a recent conference call interview she talked about how her new role as producer differs from past jobs, the challenges of doing two shows at once and advice she got from other comics-turned-actors.

On How Writing for Her Own TV Show Differs from Past Projects
"It’s very different, it’s like nothing else I have ever done. The biggest difference obviously, of all the things that I’ve written, movies and TV, I’m starring in it. So writing for myself is great because it’s much easier than having to write for other people… And I actually get to come up with an idea and execute it. I get to say, 'Then we’re in this beautiful rose garden and there’s a swan.' And then we go to set and sure enough there is a swan. So that’s the biggest difference is the scale that I’m doing it on and that the things that I envision actually get to come true, which is totally surreal and amazing."

On Developing Her Character Based on Her Stand-Up Act
"The show is 100% my standup and 100% what I’ve been developing... It makes no sense for me to have worked so hard to develop this material, that I know is funny and I know is good, which a lot of people can agree is a little bit edgy, but then get on TV and start from scratch and do something totally different. I’m just doing what I have always thought is funny, what has been proven to me is funny and reliably funny, and going to keep doing it and saying it… When you start worrying about, 'What will other people like? Are we going to offend people with this joke? Is this going to be too far?' that you get into dangerous territory and start making bad, unspecific, safe, boring TV."


On What the Show Says About Relationships
"Our generation is a generation that grew up with a lot of divorce... We grew up seeing relationships fail and be optional… And then the media tells us happily ever after and you two should get married and this and this. So there’s a lot of conflicting messages and conflicting expectations and pressures that we’re feeling while just trying to have a good thing and live day by day and enjoy a relationship. But there’s rules and pressures and stresses and it’s really tricky. And that’s what this show is about. It’s about trying to have a good relationship despite your damage, despite social pressures, despite expectations and rules and all that. It’s about customizing your relationship."

On the Difference Between Doing Stand-Up and Doing a Sitcom
"It is a very different creative process. As a comedian, you write it, you perform it, you edit it, you perform it again, you hone it yourself, and you have a long time to develop something. Before I did my hour special I got to perform it 100 times over a year and keep sharpening it and keep sharpening it and you just have proof that it’s good. You just know that it’s a 100% bulletproof joke, it got a laugh 100 times. It’s going to get a laugh on the 101st time. Whereas in a sitcom you have three days basically to make something before you put it on TV. You write the script, you table read it, you do a producer run through, you do a network run through and then you shoot it. So it’s three days... It just moves so fast. But thankfully it’s not just me. I have ten amazing writers helping me... Thankfully the part of the creative process that matters the most is the performing of it is in front of a live studio audience like standup. So once we’re actually performing it, it all starts to feel really comfortable and a safe area for me."

On the Challenge of Doing Two Shows at the Same Time
"I’m so tired. I am really tired. But the good news about CBS is that Michael Patrick King is running that show and I don’t think you can find someone better qualified to run a TV show about two women in New York than Michael. So that I get to work on the weekends and nights and I get to talk to Michael all the time about it and help out when I can. And I’m really, really proud of what that has become as well."

On Network Resistance to Her Style of Comedy
"I am really, really lucky to be at NBC under Bob Greenblatt because this new head of NBC is so supportive. We don’t sit around and go, 'How can we be edgy?' We’re really just trying to tell an honest story about this relationship and between these two people and their struggles and their sex life and that sort of thing. But he is super supportive about it’s about good TV, not safe TV. That’s their whole thing so we’ve had no struggles with that… There is something provocative and inherently edgy about honesty, which is where we always try to bring our stories, from what really happens, what do people really think and what do people really fear and what are people’s real flaws? And there’s always something a little bit provocative and taboo about that, so that’s what we strive for. And I’m really proud of it. I was worried. I have no business being on network TV, zero. I never thought I would do network television. So to be on it and completely unrestrained and supported is surreal."

On Advice from Other Comics-Turned-Actors
"Something that’s so amazing about being a comedian is that we all work in clubs. Comedians at every level work in clubs… You can be shoulder to shoulder with your heroes on any given night… When I was an open miker at The Comedy Store I’d be standing in the hallway waiting to go on and Chris Rock would come by. I brought up Chris Rock when I had been doing standup for two years. It’s [an] amazing community... And there’s not like a caste system of the big ones only hang out with the big ones and the small ones only hang out with the small ones. So I have luckily been able to meet a lot of my heroes and to get a lot of advice from people that have had this experience. And it’s been great. And another thing is that we have a lot of writers who are very experienced in working on shows like this. So we have this guy who worked on Roseanne for a long time. So for him to be in there, advice from him and heads up from him is just as valuable as well as someone who has been through it. But I’ve been really, really lucky to have a lot of great advice and mentors."