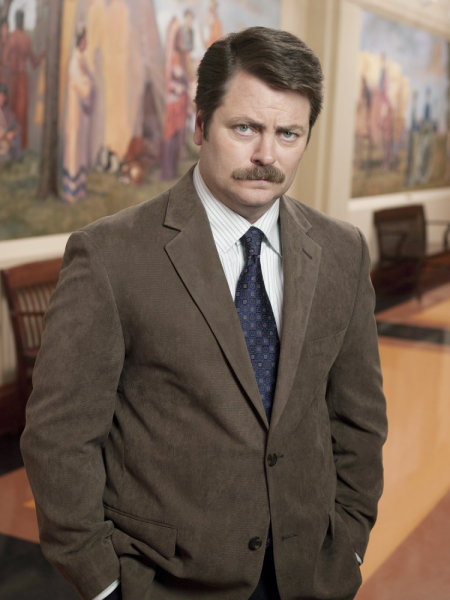 NBC Photo by Mitchell Haaseth
There have been some classic TV characters over the years, who emerged from the background to steal the show. Fonzie on Happy Days. The Reverend Jim Ignatowski on Taxi. And now Ron Swanson on Parksand Recreation. The unflappable parks department director is a Libertarian who loves meat and a not-so-good woman named Tammy. In a recent conference call interview the man behind the moustache, Nick Offerman, shared some thoughts on his breakout character.

Parks and Rec’s Tom Haverford might think he’s got game, but it’s the smoulderingly silent Ron Swanson who seems to get all the girls. Among his many loves are his ex-wives, Tammy One and Tammy Two. Viewers have met Swanson’s combative second missus, played by his real life wife Meagan Mullally (of Will and Grace fame). This season fans will be introduced to Tammy One, who will be portrayed by Patricia Clarkson.

Nick reflected on what draws beautiful woman to Swanson, “I usually assume it’s my musk that attracts people. I keep the dander to a minimum and I keep it clean, but I use just a little bit of hibiscus oil behind each shoulder. That would be my guess.”

Whatever his appeal, he’s just tickled to be sharing the small screen with the two beautiful and talented actresses. He gushed, “I am about as giggly as a schoolgirl to have landed in a position where I’m portraying a man who has made love to both Megan Mullally and Patricia Clarkson. That is a consummation devoutly to be wished.”

Of course Ron Swanson is passionate about many things. He loves women, true, but he also has soft spots for woodworking and the saxaphone. Both are concepts that Offerman holds dear to his heart in real life. When asked if he could pick another off-screen interest to incorporate into the show, he replied, “I have a penchant for the ballet, and I’ve been pitching the fellows for the whole time we’ve been in production for a Ron Swan Lake episode. And I haven’t heard of anything coming down the pike just yet, so...”

He’s also a big fan of meat, just like his character. Nick explained how it was key factor when he went into training for a nude photo shoot he and Mullally did for New York Magazine last year. “That was my wife’s idea. She thinks I’m beautiful. And to prepare for that photo shoot, we took a three-week tour of Europe where I sampled the sausages of five nations, ending with a 16-inch long bratwurst in the Town Square of Prague, a mere 18 hours before that photo shoot. And if you look closely in the picture, you can make out a bulge that I think is representative of that particular pork sausage.”

He also chose not to shave off any of his manly chest hair for the shot. He explained, “I can legitimately say that I insist on no shaving or waxing. I think that the emasculation of the modern man in popular culture is something that has weakened our society considerably. I don’t know why a heroic male these days has to have a hairless torso.”

He continued, “When I grew up admiring Joe Don Baker swinging a baseball bat and walking tall, he was a hairy son of a bitch. And to me, that’s a hero. I’m a big fan of your Brad Pitts and your Jude Laws, but I’d like to see a little hair on their chests if they’re going to be beating somebody up.”

The very hairy Offerman seems ready to do a bit of butt kicking of his own. He confessed, “I did put in a request that my catchphrase would be, ‘It’s clobbering time’ and I was told that that had already been taken.”

That aside, Nick couldn’t be happier with his gig on Parks and Rec. He acknowledged, “This is such a plum role… I love when I get to eat meat. I love when I get to dangerously make out with my wife to the point of destroying buildings and furniture. And I love everything about it. Every time I’m handed a new script, I feel like a largemouth bass at a nightcrawler convention. You can quote me on that.”