Seven Things You Should Know About Beau Bridges 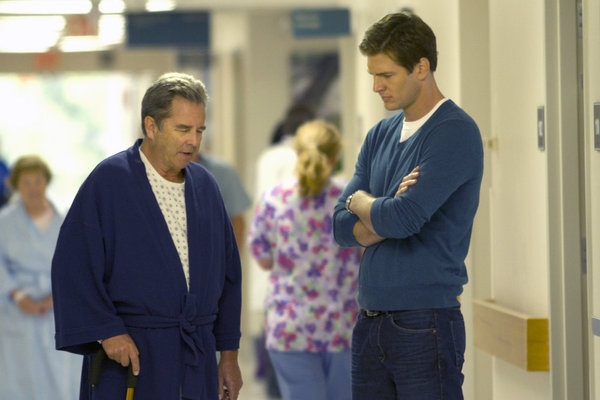 September is a big month for Beau Bridges. His new TV movie Game Plan: Tackling the Past airs on Saturday, September 3. He plays a high-school football coach who has suffered a heart attack and hopes to bring his splintered family together to take over his team. Then later in the month he is up for an Emmy Award for Outstanding Guest Actor in a Drama Series for his role on Brothers and Sisters, playing Nora Walker's love interest Brody. In a recent conference call interview we learned a few things about Beau that we think you should know, too.

He Wanted to be a Pro Ballplayer
"I love sports. I love athletics. [My co-star] Ryan [McPartlin] and I actually had that in common. We both played athletics on teams in our high school and college years. And so to get to play a coach was great. Because when I was younger and looking ahead in my future, what I wanted to do with my life, my dad was an actor so I thought that would be [good]. He seems to enjoy that. And I understand that it’s a difficult profession to get a hook in there on, but I thought I’d give that a try. But also I thought another path that I would enjoy taking would be as a coach working with young people. I’ve coached all my own kids’ athletic teams, and was lucky enough to sit on the bench with John Wooden as my coach playing freshman basketball at UCLA. It didn’t go any further than that, but that was a great experience — one of the great college coaches of all time. And I remained friendly with him and in contact with him for the rest of his time on the planet. And that was just a real blessing."

He Lives By John Wooden’s Pyramid of Success
"I found out the hard way very quickly going to such a powerhouse basketball college what a little fish I was. And, I realized how lucky I was to even make the freshman team and to be able to be around those guys. But what I came away with, especially being tutored by a man like John Wooden was I learned lessons that were life lessons. I don’t know if you're familiar with John Wooden’s pyramid of success? It was something that he actually developed as an English teacher before he became a coach, and it’s basically all the qualities you need to find success. And they’re blocks of the pyramid that are things that you need to take on to reach that pinnacle. And the two cornerstones are industriousness, which is hard work, and enthusiasm, which is joy. Coach always said that you could come to the task with hard work, but it’s when it’s brought in combination with joy, those two things — hard work and joy — that’s when special things happen. And then the very pinnacle of the pyramid is divided in half into faith and patience, meaning when the big game is at hand that you have to be patient and you have to have faith — faith in whatever you believe in and faith in yourself. And so I did get a lot out of my experience playing at UCLA."


He Has Family Nights at Home
"I’m of a generation where we just had radio, and so I remember how exciting it was when I went to see the Lone Ranger for the first time when I was a little kid. And now, of course, technology is so sophisticated that it’s such a huge part of our lives. And so much so that I think sometimes young people, especially, tend to get isolated with the little thing they can hold in their hand to watch films and everything else and they kind of go away. But in our family, we like to gather around the television and watch sporting events and films and shows, and it’s a great time for people to come together."

He Wants to Win the Emmy for the Brothers and Sisters Cast
"I feel that my nomination certainly was a good thing in my life, but I also feel that I’m kind of representing that whole show at this year’s Emmys. They did such great work, and, of course, my dear friend Sally Field was so amazing and to get to play with her was just fantastic. And so that’s a shared experience with that whole cast and crew."

He Has Detailed Advice for Young Actors
"I was very fortunate that I had my dad Lloyd, who was an actor, firmly entrenched in the business and quite successful, and he helped me get that first job and I’m forever blessed for that. And I recognize how difficult that first job is to get, but that doesn’t mean it’s impossible. What’s important for any young person who wants to join the fraternity of actors is to get out there and do your thing. Just get involved in your school theater. Get involved in your community theater. Because the best way to get that first professional job is to have people see what you can do. And if you sit there waiting for your phone to ring, nothing’s going to happen. So you need to get out there and work, work, work and try to associate with people who are professionals in any way you can — volunteer, assist, whatever you can do so that it can lead to that first job.

"I also would like to recommend a book called Acting: The First Six Lessons by Richard Boleslawski written in about 1933. It was the only book on acting my father Lloyd gave me when I was a kid about 16. I’ve given it to all my kids… So if anyone wants to pick up that play they can, and it’s a great play to perform. It’s a two hander. The teacher and his student who he calls The Creature. And it’s basically Boleslawski was a student of Constantine Stanislavski, so it’s kind of what we call the method acting. There’s all kinds of ways of approaching acting though. I worked with all sorts of actors, wonderful actors, through the years, and they all go about it totally differently. There’s no correct way to do it. But that book is an interesting one.

"I would also encourage young actors to write. Basically our business is to tell stories, and if there’s no stories to tell, then what’s an actor going to do? And just like Shakespeare said, 'The play’s the thing.' So if you write, then that’s another way of creating work for yourself or creating performances for yourself is to write your own material and go out and do it. Many actors have gotten people’s attention by doing just that."

He Wrote a Play with His Daughter Emily
"A year ago, my daughter Emily, who’s 25 now and just recently graduated from Fordham University in New York, Emily and I adapted [Acting: The First Six Lessons] into a play which we performed in Los Angeles. And we recently just got published by Samuel French… When we adapted the novel, we kept of Boleslawski’s stuff, but we also weaved in our own personal lives because it was a book that was given to me by my father and I gave it to Emily. We already performed it for a couple of months in Los Angeles, and now we want to tour it in universities and regional theaters. And we’re getting that together right now. But the nice thing about having it published by Sam French is that other people can now go out and perform it as well."

He Worked with George Clooney in The Descendants
"He’s just a real prince of a guy. He’s a lot of fun. He’s got a mischievous thing about him, which I didn’t see too directly. I heard about it mostly from other people. But he loves what he does. He’s really good at what he does. He works hard. He’s very respectful of all the other actors and the crew. And yes, it was a lot of fun. I did The Descendants with him, which is coming out probably in a couple months."

Watch Beau in Game Time: Tackling the Past on Saturday, September 3 at 8 p.m. EST/ 7 p.m. Central on NBC.