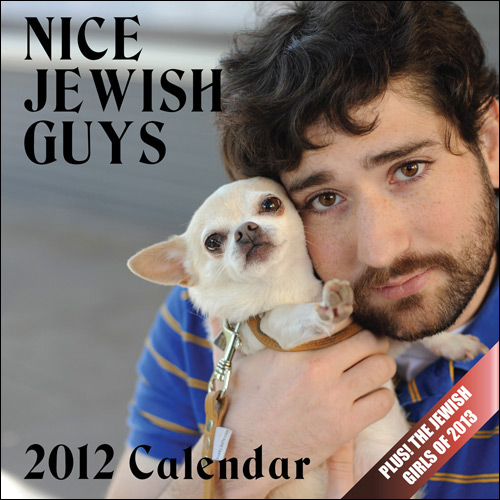 Adam Cohen is a TV producer, but he has a little side project going that he never expected would take off the way it has. In 2010 Adam created The Nice Jewish Guys Calendar. In a recent exclusive interview he told us the genesis of the project.

Adam revealed that the calendar began as a joke with his friends. "Everyone always makes these calendars with fireman and hot chicks. What about like me? A Jewish guy? And I'm posed up on a rock with my foot kicked up and I'm holding a jacket and it's like Adam or some other guy like David or typical Jewish guy names."

Cut to years later when Adam brought the subject up once again. This time his buddies reacted by saying, "Dude, that's brilliant. It's unexpected these are unlikely heroes these Jewish guys. Who would ever put them on a calendar? And it’s going to get people talking."

And surprisingly to Adam, they are talking. He stated, "It's kind of a sweet joke. Girls get it. They're always looking for a nice guy. They're always complaining, 'There's no nice guys out there.' I thought, maybe they'll put these guys on a calendar and they'll look at them differently like maybe I should put them more on a pedestal… Maybe this is the guy you should be dating. They're just as good a catch as the shirtless fireman on the calendar."


And so he set out to make The Nice Jewish Guy Calendar. At first the models were a bit nervous. They'd ask, "Why do you want to put me in a calendar? Do I keep my clothes on?" And Adam would reply, "Yeah, you keep everything on, your glasses, too."

The models were also afraid to be the brunt of a joke. But Adam had no intention of doing poking fun at them. He mentioned some advice he got from a comedy writer friend. "The way it's funniest is if you don't try to make fun of something. You just show it for what it. You just have to be fortunate enough to find the right thing that is funny. Just photographing these guys and being really earnest about it and putting them in poses that any other model it would be in except that it's these guys that you would never expect to be modeling and looking like hot sexy models is what makes it really funny and irreverent."

He clearly is doing something right. The 2012 calendar is now selling in one of the hottest stores in the country, Kitson. The regular haunt of paparazzi grabbing stars like Paris Hilton and Lindsay Lohan is now stocking The Nice Jewish Guy Calendar right alongside the autobiographies of Marlon Brando and Frank Sinatra. Not only that, the Melrose store has a larger than life Nice Jewish Guys banner hanging on the side of the store.

Adam summed up the popularity of the calendar by saying, "It's all women who are buying it for their friends. No one has ever seen something like this before and they're cracking up about it. But at the same time they're like, 'I totally want these guys on my wall. These guys rock. They should totally be in a calendar.'"

And while the calendar is mainly appealing to the ladies, guys should not feel left out. There is three extra months in the 2012 calendar as an added bonus. January, February and March of 2013 are Nice Jewish Girls. Adam is testing the waters to see how they are received before diving in to a full calendar for 2014.

In the meantime, girls everywhere are basking in the glow of Nice Jewish Guys like Mikael, Jordan and cover boy Ben. Adam admitted that Ben was not the obvious choice going in to his photo session. He recalled thinking, "We're going to bury him somewhere in the calendar. It's just not going to work out with him."

But then something unexpected happened — the dog. Ben picked up the puppy and, "It just became perfect… This guy tells the story. What more do you need? The guy with his dog, trying to look sweet, obviously Jewish it was just so perfect. It was magic."