Go Out and See Our America with Lisa Ling 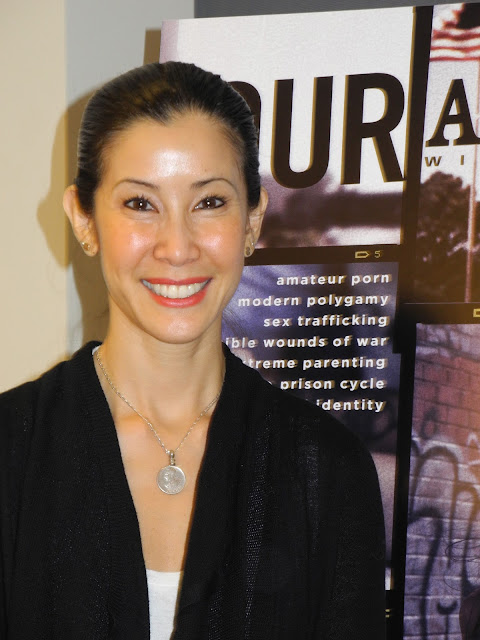 Photo by Pop Culture Passionistas
We’re not going to lie. We’ve been fortunate enough to meet a lot of really cool people through this gig. And we’ve had the opportunity to speak with some of our favorite stars. But we rarely meet someone that we can truly say we admire and that inspires us to be better people. That is until we were invited to the OWN offices to have lunch with Lisa Ling.

The star of Our America with Lisa Ling has managed to achieve what few modern news people have. She doesn’t tell the easy story. She doesn’t pander to the audience’s appetite for information on the trending buzzword of the day. And she most definitely isn’t satisfied taking the cushy assignment and going for the fluff piece.

Lisa explained that she understands that Oprah Winfrey’s network initially went out on a limb when they green lit her series. “OWN really took a risk on the show – this anthropological look at different subcultures in America. That doesn’t sound like a big ratings getter, but the show has done really well and people have really responded to it. And again it’s because I really strongly believe in my gut and in my heart that there is a yearning for good storytelling in this country. And unfortunately I don’t know that we’re getting a lot of that on mainstream television.”

Despite the fact that she’s covering some pretty gritty topics, Lisa noted that she feels the show has a universal appeal. She acknowledged, “It’s a mainstream viewer that is our audience. This show is really non-judgmental. It really is a window into these worlds. And so everyone’s invited. Is it a more highbrow audience? I don’t even think so. It’s a beautiful show. I think it’s a beautifully written show and produced. But people will find something. There’s something for everyone in this show.”

And Lisa hopes that repeat viewers will start to develop a greater understanding of the world around them. “If you watch the show regularly… my hope is that you become a more compassionate person and that you allow yourself to have more of an open mind about people. As a culture, I think we’re so predisposed to cast judgment on people immediately. And what I love about this show is it takes you into these worlds and really allows you to kind of get enmeshed in a way that you wouldn’t be able to otherwise. So I think that the audience is everyone. I really do.”

That sense of understanding starts with Lisa herself. She manages to balance the ability to deliver an objective report while establishing emotional connection with her subjects – a rare and compelling fete. She spoke of the critical observation she has developed while filming, saying, “At the end of the day, for me when I’m out in the field, I always put myself into their shoes and there’s always something. Everybody has the same desires…. Everybody has a story and everybody wants to be heard. And that’s the common thread — that if you actually stop and listen to people you might be surprised by the fact that they may have some interesting things to say. And everyone has that. Everyone’s story is rich and substantive.”

She continued, “We just don’t take the time to listen to people. So what Our America tries to do, through me as the vehicle, is take you in so that it makes the experience just a little bit easier to digest, I suppose. There’s so much out there and it’s hard to get invested in more people’s lives because there’s so many channels, there’s so many shows. But we’re just kind of this vehicle that makes it just a little bit easier I guess.”

And Lisa and her team share those stories without manipulating the outcome in any way. In fact she explained that they have no idea how the plot is going to unfold when they head out to shoot. She revealed, “We don’t set out to say, ‘Okay from the beginning we’re going to.’ We don’t set out to define the experience we’re going to have. We just go have it. And I think what we’ve found is that whenever we really get engaged and immersed in these communities, all of those things happen.”

As a result viewers take truly heartfelt journeys during each hour-long episode. Lisa remarked, “You experience tragedies with people. You experience challenges but you also experience their hopes and their aspirations.”

And through it all Lisa has realized that there is one aspect of humanity that is relevant to everyone. “Hope is one of those [common] threads everyone has. So somehow these people in wanting to share their stories with us, they have a desire also to share the fact that they are people, too. They have feelings and they have aspirations.”

Get a box of Kleenex and tune in to Our America with Lisa Ling on Sundays at 10 p.m. EST/9 p.m. Central on OWN.
Posted by Pop Culture Passionistas at 8:40 AM