The Biggest Loser's Johnny Forger Discusses His Time on the Ranch 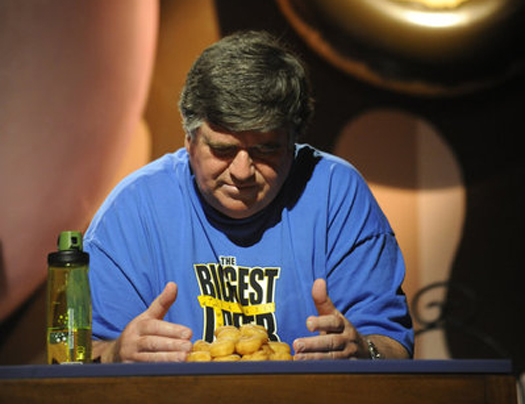 Last week Johnny Forger from Canton, Massachusetts, was eliminated from The Biggest Loser. And while we were rooting for our local boy (we grew up in the next town over from Canton), he somehow gained weight this week instead of dropping pounds. In a recent conference call interview he told us why he had a positive number on the scale and what his time at the ranch was like.

The episode began with an infamous Biggest Loser donut temptation. Three contestants at a time were sent into a room to sit in front of a plate of donuts for three minutes. The person who ate the most of the miniature breakfast treats won the power to assign gym time to each team that week. Johnny described the challenge. "When I walked into the room and I saw all these doughnuts, you could smell it. It was awful after what we’ve been withdrawn from. And I said to myself, 'There’s no way in hell am I going to eat one of those doughnuts.'"

His strategy was to fake out his competitors by grunting and groaning and making it sound like he was enjoying the sweet snacks. "The first time I was in there was to try to get Ramon, who’s a big boy too, to start downing them and Ramon held the line. I went back in because we were short one person who had been voted off. And I got another shot at Big John next to me and I said to John, 'I’m going to get a second plate' before we started. And, of course, he’s a very competitive guy and he went for it, as you could see, and he sucked in 37 big doughnuts. Mission accomplished."

Big John won the challenge and took the early morning workout slot for his team and gave Johnny's team the mid-day workout. It was a win-win all around. But despite the best gym schedule and some pretty grueling workouts, Johnny's Blue Team wound up in the bottom of the weigh-in for the second week in a row. Johnny had actually gained weight this week and was sent home. He attributed the increase to too many painkillers. "I had overdone the Advil, like eight or ten a day, and that causes a lot of fluid retention and I made a mistake."


Only three of his teammates remain and many wonder if the Blue Team, which is made up of the oldest players on the ranch, will continue to get creamed on the scale. But Johnny had confidence in his team saying, "Coach is a great guy, great athlete. He’s been a leader on our team, an inspiration for showing us what we can do for the shape that we’re in. And Becky is a natural born athlete. I watched her swim the first time I met her and she was just a powerhouse… The age has the wisdom and the experience, and after a week or two in that gym you get your fortitude and your muscles come back, so I’m banking on one of those two or both."

And while many BL fans blame Anna Kournikova's lack of experience as a personal trainer for the Blue Team's steady defeats, Johnny defended his coach. "Anna is a world class athlete and there were rumors that she’s not going to be tough and a real trainer. Well she is more than a trainer because the trainers usually train and aren’t being trained constantly. And Anna explained her life from the age of five coming to the U.S., and then nine becoming a tennis player and the intensity that she went through. And when she said, 'You know you need to do this,' I knew that she knew and she had experienced it and she was good."

He reflected on his time training with Anna, "I looked at the three hours as we walked into the gym and I thought to myself, 'In three hours it doesn’t matter what she can do to us. She can do just as she pleases and push us to the limit. I know that 10 or 15 minutes after it’s over I’m going to feel like a new man.' And I was. I wanted it. I wanted it and she brought it on… She’s a great trainer."

His good attitude about letting Anna beat him up was especially surprising given the fact that Johnny was not all that familiar with the show. He recalled that he had seen it a half dozen times, but that his family members were huge fans and convinced him to try out. "The God’s honest truth is when I walked into the first exercise routine it was like walking into a buzz saw. I didn’t know it was coming. I took a look and I’m talking to myself, but I’m saying, 'When I get home I’m going to kill every one of you kids.' They sent me into a buzz saw but I’m glad they did."

Johnny seemed eternally grateful to his family, "I thank them because, quite frankly, they have changed my life and saved my life really. We get to a point as you’re aging that people start passing away and people mostly start to get overweight and have problems and so forth and accept them. And don’t get off the couch and don’t stop eating and don’t look at the food as fuel… I’ve learned essentially that food is fuel to get me to do what I need to do, no to become complacent and go back into the overeating."

He continued, "I feel like I’m in my 40s and it’s something that America can do if they pay attention to it, and they just get a hold of it… I’m only at this like four months and I’ve dropped a big load of weight, and I’m doing regularly every week and I’m not hungry and I’m happy and I’m sleeping better… so I highly recommend it to all of America. I went first, so come on guys, everybody let’s follow our leader."