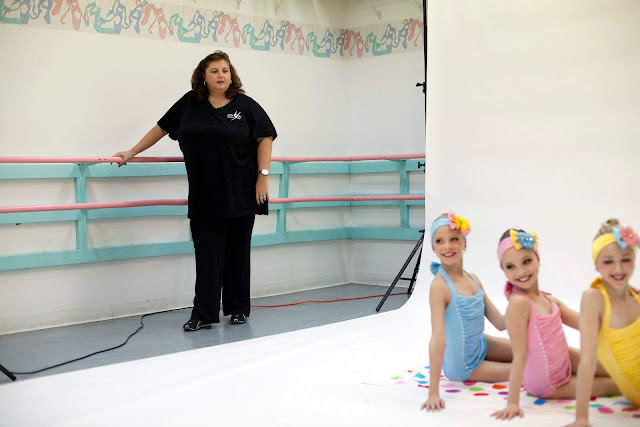 Photo by Scott Gries /Lifetime Television
Any little girl who took her dance lessons seriously knows that the land of tutus and tap shoes can be dog eat dog world. Not only do these tiny hoofers have to learn all the complicated moves, but they have to put up with often overbearing stage mothers. Still in the right hands, young talent can be molded and stars can be made.

This season Abby Lee Miller became reality TV’s most well known instructor on Dance Moms. Besides imparting the basics of jazz hands and showmanship, she helps the girls with their mental games — like reminding her most winning student that her competitors are out to take her down.

In a recent interview Abby Lee addressed the question of how she finds balance between driving her kids to excel and pushing them too hard. Her reply was very straightforward, “Well, I’ve never driven them too hard, that’s for certain. I just sometimes have bigger dreams for the child than they have for themselves.”

The teacher estimated that she has trained between 3,000 and 4,000 dancers during her career, so she can certainly put her money where her mouth is. As her students succeed, she proves time and time again that her methods work. Take for example her proudest professional accomplishment. As she described it she was “sitting in the Broadway Theater the first day that Footloose moved into the theater. It was their very first rehearsal on stage and I snuck into the theater and it was my student’s Broadway debut.”

She continued, “Without my student knowing, I was there and I got permission to sit in the theater… And the choreographer of the Broadway show came in and sat next to me and said, ‘I’d like your honest opinion, what do you think? Should I change anything?’ And that was pretty amazing and I said, ‘I don’t care what you change; just don’t change that boy in the middle that’s doing that aerial walkover.’”

Catch the season finale of Dance Moms tonight at 10 p.m. EST/9 p.m. Central on Lifetime Television. And follow the #dancemoms Twitter stream during the show when the dance moms and Abby Lee will live tweet during the episode.

Watch a sneak peak of the finale:
Posted by Pop Culture Passionistas at 2:00 AM