Who Doesn’t Love A Cupcake? 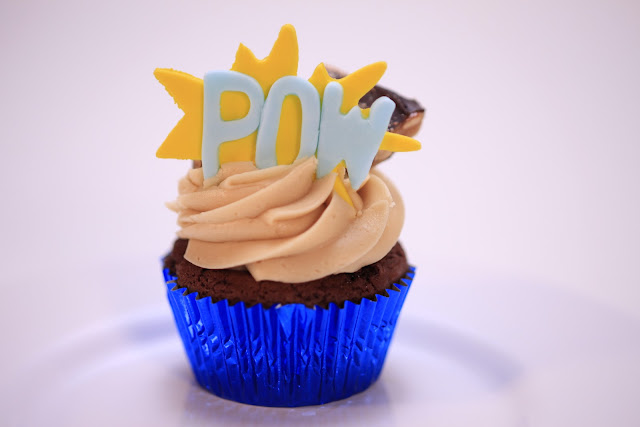 There's been a void in our TV lives since Craft Corner Deathmatch starring The Daily Show's Jason Jones went off the air several years ago. We have been longing for a show that mixes that competitive spirit with a little bit of ironic self-deprecation. And then along came Adam Cohen and his genius series Cupcake Wars. The Food Network's offering pits four cupcake makers in three rounds of seriously heavy baking. The winners get to bring their creations to a big industry event, exposing their bakeries to the masses.

We had the pleasure of speaking with Adam recently about just what it is that makes Cupcake Wars so popular. He replied, "Who doesn’t love a cupcake?" Okay, really we said that to him but he loved it and wanted to get credit for it. But his real answer was, "It's elevating something that's so petite, cute and simple to deathmatch or war. It’s so ridiculous." He continued, "It’s unexpected. People don't expect a war to be over cupcakes — just the irony of it."

He went on to describe the first promo for the series, saying it was "genius." He explained, "They had a little cupcake and words on the screen like 'Bring it on' and 'Is that all you got?' And towards the end of the promo the cupcake explodes like it was a bomb… It's an insane juxtaposition of fighting over cupcakes."

He added, "That's a welcome relief nowadays in the world, where everyone takes themselves so seriously with so many competitions. And everyone loves the little confectionary. It's the perfect little food and it's really fun to see all these people put all these crazy ingredients into this little cupcake and make it delicious."


The challenge on Cupcake Wars, if you have not seen the show, is that each week the bakers are given a theme and seemingly impossible ingredients that must be incorporated into their creations. Each episode features a big event that the bakers are preparing cupcakes for and so the ingredients fit the theme of the event — from Sea World parties to beauty pageants to awards ceremonies. So they may need to use flavors of the south like jalapenos and pulled pork or stick to a Hawaiian theme with tuna and taro root.

Adam stated, "We keep it fresh by always trying to find different events — interesting different kinds of things that serve two purposes. One, if whatever cupcake maker wins at the end of the episode it really does have an impact on their business by going to this thing. It really does give them exposure and it really is good for them to be seen there and to get their name out. And B, it's an event that really gives us the opportunity to have interesting concoctions."

He recalled the episode where the contestants were making cupcakes for an event at Sea World using seafood ingredients. He admitted that the results could have been disastrous, but noted, "These people are real artisans with cupcakes. And they are people who spent so much time developing cupcakes on their own in their cupcake stores that they're really ready for these kinds of things. And they're really good at taking a chance with salmon, as Hollis did, and creating something that could be really savory and gross and making it really delicious and perfect."

In fact, Hollis' salmon cupcake is one of Adam's all-time favorites. But he says it's hard to pick the best because he doesn't think he's the most qualified judge. "We all have different opinions. In the control room, we’re tasting them along with the judges so as the exec producers we know what's going on. I'm just a snob for peanut butter and for chocolate or anything molten. I love it. I don’t have as discerning taste as the judges so I'm a little bit more of a sucker and will like things more readily."

He added, "I just try to make sure that the train stays on the track and everything's fair and everything's concise and clear and that we're judging them fairly. But I'm just a sucker for all cupcakes."

And yet he exaggerated. Because he did confess some of the cupcakes just don’t work. "There have been some that I really have absolutely not liked that have been out and out gross." And while he expects some of the more outrageous flavors to be a challenge for the cooks, he says surprisingly it's the more traditional flavors that can trip them up.

"People are just making some simple chocolate with espresso and some butter cream frosting with maybe some raspberry compote in the middle and shockingly, you think you couldn’t mess that up. And they just screw up in the time they're give and the cake is just dense and it's unappealing… The simple ones are the ones that really get screwed up a lot and you always ask yourself, 'How can you screw this up?'"

But he divulged, "It's just the pressure cooker. People think it’s one thing and they think they can cook in their kitchen and they may practice on their favorite cupcake in their kitchen to get ready for Cupcake Wars thinking, if we can do that we can do whatever Cupcake Wars throws at us. And then they get on under the hot lights and judges looking at them and cameramen staring at them and I think people just like sometimes have a breakdown."

And yet the competitors keep coming back for more. According to Adam there is never a shortage of contestants. "There's a plethora of people who want to get on Cupcake Wars. It’s always a delicate balance between personality and ability and being fair and looking across the country and trying to find a good mix of people. It's a big feather in a cupcake makers cap to be on the show and to even compete."

For related stories check out:
Gail Simmons Gets Her Just Desserts
Danielle Keene Serves up Bittersweet Treats on Top Chef