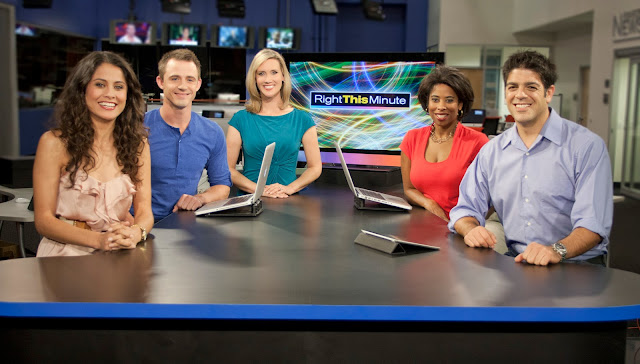 RightThisMinute is a brand new take on news. The daily, hour-long series culls the best of the best from the Internet and non-traditional sources to deliver stories that most viewers would never find on their own. In a recent exclusive interview series’ executive producer Lisa Hudson and lead host Beth Troutman described their unique new program.

Lisa explained how the content that is surfaced shows something about each member of the staff. “It reflects different personalities of the people. It reflects how you would really watch videos with your friends. There are some people who have a more serious take on things and they just gravitate towards more newsy. And there are people who are more edgy and smartass. If you think about how you really live, sometimes you want to be serious about a story and sometimes you want to just laugh at it.”

For her part she explained what she’s drawn to. “I like stories that either make you really laugh or they make you feel something. I hate middle ground. If it’s mediocre crap, I’m like, ‘Don’t put it in this show. I don’t want it.’”

That fits in well with Beth’s sensibilities as well. The former congressional candidate has a background in more mainstream news. She explained how that experience helps her in the unique world of RightThisMinute. “When you’re a reporter or a journalist it’s all about finding a story and helping make the story interesting and understandable to your viewing audience. And that’s what this show is all about. It’s finding the stories that are out there in the world online and then making the story interesting and making it compelling to the people who are watching. So this is similar to reporting in that regard and it helps me tell a better story, especially since I don’t have someone writing the story for me.”

She also explained what her various co-hosts bring to the table. She started by saying, “Nick Calderone is the antithesis of me. He’s the man’s man that brings the stories that manly men are going to like — the car wrecks and the racing motorcycles and the stories about beautiful women. And I’m the exact opposite of him. I’m the person with the Women’s Studies background and I have feminist tendencies.”

Beth continued, “Christian Vera, who is very compassionate and sweet and just a lovely person, is very grounding in her stories. And we also have Steve Fabian who always brings humor and great questions to the table. And he always gauges very well what people who are watching might think or might want to know. He’s great at that.”

She rounded out her recap of the team, concluding, “And then we have Gayle Bass, who has a political background and has done talk radio. And she always has a witty comment or great background knowledge on political stories or things that are going on in the world. And so together with the five of us you get really a 360-degree view of any given story. Each one of us represents any given personality of someone who might be watching.”

Lisa helps wrangle those diverse interests into one interesting and coherent daily program. And on top of it all she notes that the production team digs up all the stories viewers most likely wouldn’t find on their own. “There’s so much out there you could never possibly get to it. So we try to get to as much as possible, a lot of different topics and just take the best of the best. It’s not news. It’s newsy.”

And as Beth admitted it’s delivered in a much more relatable way. She commented on the show’s tone, adding, “We inform through a conversation rather than looking straight at the camera and reading a story to someone… It is a conversation that viewers get to listen to and be a part of – be a fly on the wall.”

Check your local listings to find RightThisMinute on TV. Visit their official website for additional content from the RTM team and to find out how to share a story of your own.