An Interview with the Executive Producers of Grimm 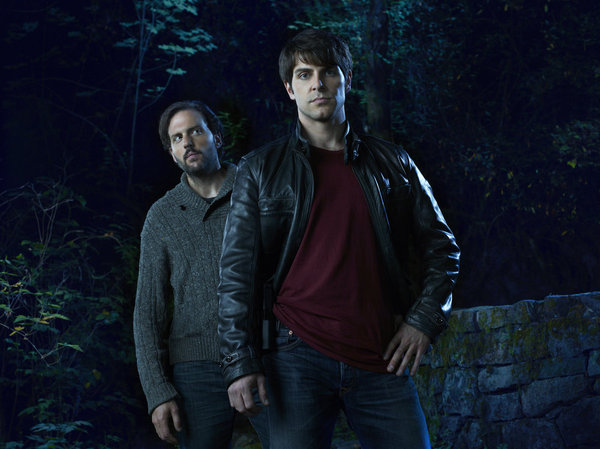 On October 28, just in time for the spooky Halloween weekend, NBC is premiering it long anticipated new show Grimm. The series was created by Will & Grace's Sean Hayes and his partner Todd Milliner and is being executive produced by David Greenwalt and Jim Kouf of Buffy the Vampire Slyer and Ghost Whisperer fame. It tells the tale of detective Nick Burkhardt, played by David Giuntoli, who discovers that he comes from a long line of Grimms, criminal profilers trying to protect people from the mythical creatures that roam the earth.

But the interesting thing about the show's approach is that all of the characters are normal. No one is immortal. No one has supernatural powers. But many have a mythical side, seen only by the Grimms. This dual world is what David and Jim have set out to explore and also what challenges them the most. In a recent conference call interview Jim explained, "Our show is based in our world. So we’re just explaining a lot of bad behavior with fairytale reasons."

He revealed the story behind detective Burkhardt. "The Grimm books that he has are the original stories that were handed down from the Grimm brothers and passed on and added to by generations of Grimms. So they're more like profiles, criminal behavior and creatures. So that’s what he’s got. He’s got ancient book to reference."

He further clarified, "The characters [don't] reference the Grimm fairytales when they’re solving the crimes because it’s an actual crime for them to deal with. So they’re not going, 'Gee this is just like Goldilocks and the Three Bears.'"

This premise is what makes the project both exciting and difficult for the executive producers. David noted, "The challenges are what is happening in each episode that is a crime that could occur in our real world. And it also has some kind of Grimm meaning to it that they do in their world. And that’s a challenge because you have to have a couple of stories for every story."

It is this double-edged sword that makes the visual effects and make-up so essential to the show. David admitted, "We have worked long and hard to try to get a look to the show for the makeup and the special effects that is expressing something that’s inside the character you’re seeing. There’s not just somebody in a mask but that you’re seeing the sorrow, the rage."

He continued, "The idea that these creatures live among us. But also that these feelings live inside all of us and the best way to express that is when the creatures look like the actors playing them. Not just like some fierce person in a mask."

Jim interjected, "The emotions manifest themselves in kind of physical characteristics." He expanded, "What we think is a child molester is actually a big bad wolf and we see that morph out as they become emotionally aroused. So that’s how our main character, the Grimm, can see these characters beneath the humans."

And after the Grimm discovers his ability to see the creatures, he encounters one who will help him navigate the world. The character of Monroe, played by Prison Break's Silas Weir Mitchell, is a reformed creature, trying to control his impulses.

David divulged, "We’re talking about a very interesting character who comes from a family of big bad wolves. But as he says himself, he’s not that big and he’s not that bad anymore. And in a way, his character is the most human of any of the characters because he’s the one that’s most battling his instincts. And he might have an instinct to go after a little girl in a read hoodie. But he’s learned to not do that. And he’s a vegetarian and he goes to Pilates classes. He takes certain anti-depressant drugs that help keep him in shape… But he is helping a Grimm which is going to create a lot of trouble for him."

But Monroe is a not a typical creature, in fact it seems there is no such thing. Jim remarked, "Not all creatures are bad to begin with."

And David expanded, "No some of them are good and they run the gambit just like you and I and the people in the world of good, bad and indifferent. So Monroe has had to fight his nature because of the family he comes from. But not everybody is out there doing dastardly things. Most of them are just trying to pay the rent and get on with their lives."