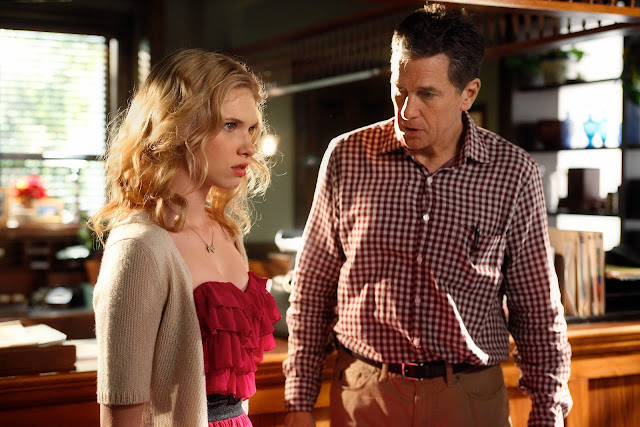 Tonight a young actress named Claudia Lee will make her debut on the CW series Hart of Dixie. Not only has the 15-year-old been acting on shows like Zeke and Luther, but she also has recently recorded her debut album Hollywood Sunset. In a recent exclusive interview, Claudia talked about getting cast on Hart of Dixie, working with her co-stars and her music career.

Claudia recounted how she got the part on the CW show, saying, “I went to this audition. After the audition I was like, ‘Oh gosh, I don’t even think I have a chance here.’ Then they called me back for a call back and I guess the director and the producer really fell in love with me. And then they brought me in for a work session.”

Still the actress wasn’t confident that she had landed the role. She continued, “When I got the call, I thought my managers were just going to say, ‘Claudia, you moved to the next round.’ Because I’ve had so many experiences like that recently, because I’ve been so close on things. But really when they called me I was in shock. I had to take a breathe for a moment and then be like, ‘Whoa, did they really say that I got it?’”

Claudia plays Jamie King’s character’s sister, Magnolia Breeland. She teased, “She is daddy’s little girl, but when she’s talking to her sister Lemon and when she’s dealing with her, it’s a whole different story. The claws come out and the mean is in the air.”

Fur may fly on the show but Claudia revealed that she and King couldn’t get along better in real life. She remarked of King, “She is the sweetest person ever. She took me under her wing and helped me out. We really bonded extremely well. It was really kind of scary.”

Being welcomed on a show by one of the series regulars was important to the young actress. She admitted, “Going to a set you really don’t know how it’s going to be and you really are hoping for a really happy and fun atmosphere…. But I wasn’t sure what to expect. And when I met [Jamie] she literally was like, ‘Do you want to run lines? I think this would be better because it would totally fill this out. And then I’ll do that and then you’ll do that.’ The energy and the focus that we had when were on set was just powerful.”

Claudia also had nothing but the nicest things to say about Dixie’s star Rachel Bilson. “First of all, being as talented and having as many credits as she has, she is so down to earth. She drives her Prius. She’s really sweet. She’s really nice — and working with her and learning how she handles everything. She’s one of the leads on the show and she has more lines than I do or some of the other characters and just seeing her work. Her work ethic is really amazing and really is something that I honed into and really watched to learn from her.”

There’s one other aspect of being on Dixie that Claudia seemed to really enjoy. She divulged, “I really love doing southern accents. So when I was able to do the southern accent for the show it was amazing.”

After tonight’s episode, fans will be able to catch Claudia on Dixie again on December 5. And if they’re looking for something to fill their Claudia Lee void, they can check out the single off her debut album Hollywood Sunset.

The talented singer, who’s been playing piano since the age of eight, explained that on Hollywood Sunset, “Each song has a little message and I guess my album altogether sends out a really big message.”

Fans will really get a sense of who Claudia is when they listen to her music because it’s a part of her. She confessed, “I’ve really put my heart and soul into it – every thought, every feeling, every emotion — most of my emotions. But working on it was just amazing because it was focused time on something that I really care about. And the fact that people are going to be able to hear it soon is a little apprehensive but also very exciting, because I’ve worked on it for so long that I’m just ready for people to respond and interpret it in their own way.”

They’ll also get a chance to talk with Claudia who started a radio tour to promote the album last week. She discussed her upcoming plans, “I’m so excited because I’m going to be touring to radios, seeing different places, meeting different fans and making a lot of fans and friends at the same time.”

Watch Claudia on Hart of Dixie tonight at 9 p.m. EST/8 p.m. Central on the CW and visit her website to find out more about her music career.

Watch our interview with Claudia on YouTube.
Posted by Pop Culture Passionistas at 2:00 AM