Friend Zone — 'The Most Uncomfortable, Entertaining Show Ever' 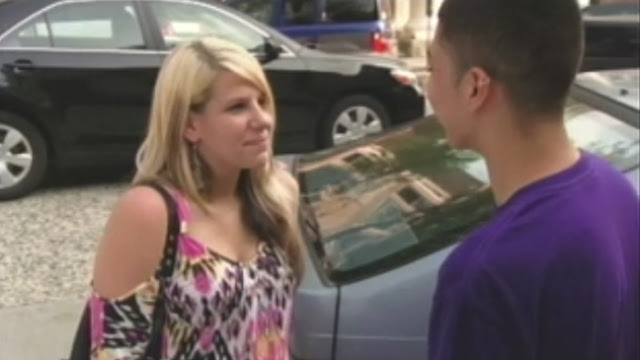 We've all been there — the friend zone. You're best buddies. You tell each other your deepest, darkest secrets. You share everything, except one tiny detail — you are crushing hard on them. So what happens when you expose your true feelings?

SallyAnn Salsano, creator of Jersey Shore, decided to find out, and MTV's Friend Zone was born. In our exclusive interview with the executive producer, she stated, "This happens to everyone. I'm 37 years old and last year I was in the friend zone. And that's literally how we came up with the show. Do you say something? Do you not? What do you do? You feel like a loser. What if this guy's like, 'You're just a weirdo. We're just friends.' And I'm 37. Can you imagine when you're 18 what this feels like? Being on pins and needles is just crazy and it's so much fun to watch. I can't even tell you."

Before you start lamenting about another unrealistic, over the top dating show, hear SallyAnn out. "When people think you're doing a dating show, everyone thinks limousines, sparkly lights and fancy dates. This is the most real and raw dating show that I've seen almost ever."

The premise of the show is simple. There are two friends, one wants to go to the next level, the other is clueless. So SallyAnn helps arrange a confession. "They think they are helping their friends get ready for the date... and right as they bring them to the date, to meet the person, they're like, 'Where is the other person?'" When the friend finds out they date has been arranged for them SallyAnn revealed, "That's where they confess their love for the person."


What happens next is anyone's guess. Even the producers are unsure of the answer. SallyAnn said they spend a few days with the couple beforehand to get a sense of the dynamic of the relationship and they think can predict the outcome. But she admitted, "We are wrong about 70% of the time. We are like, 'She is so not in to him.' And then she says yes... You almost can't believe what's going on. This is the most uncomfortable, entertaining show to watch ever."

When trying to get out of the friend zone there are pretty much two outcomes. One, the other person loves you, too, and you live happily ever after. Two, they just dont see you "that way" and your soul is crushed. SallyAnn divulged that you see both outcomes on the show.

She noted, "There's some when you have the world's dorkiest guy with the prettiest girl and you're like, 'This is going to be a nightmare' or vice versa. And then the person says yes and you love it. And then there are times when you have the prettiest girl and she's like, 'I always get what I want.' And then she gets shot down. SallyAnn confessed, "Both of those seem fun to me in an odd way."

But there are also the times when the affections are not reciprocated and these moments can be cringeworthy. SallyAnn pointed out the most difficult part of the show, "They all know each other. It's not like, 'I saw this guy at a bar or at a party.' These are people that know each other, so when they're being rejected, it's like they're really rejecting them. There's no way to play it up like, 'If they knew me they'd feel differently.'" She remarked, "Oh, they know you."

There is one phrase in particular that the rejected hate to hear. SallyAnn acknowledged, "I love when they say, 'You're more like a brother to me.' There was one guy that on the date when the girl said that, picked up a butter knife and pointed it at his heart. Before his date he goes, 'The only thing I don't want to hear is 'You're more like a brother to me.' And sure enough that's exactly like what she said."

She added, "You get a couple of those 'It's not you, it's me.' All those things that we all dread hearing in our lives."

But there's even more to the story. SallyAnn explained, "Even when you find out the answer — will she go on the date or not — you still then have to see what happens a month later, which I love." In the follow-up segment Friend Zone revisits the couple to find out what happens after the fateful night. In some cases the couples lived happily ever after right from the get go. There are other times when the person accepted the date but didn't follow through with a relationship. And there are still others who turned down the date then had a change of heart and admitted their feeling after the cameras were turned off.

For related stories check out:
SallyAnn Salsano Is a Big Wig on the Jersey Shore
We Got Our MTV