Competitors Get a Shot at Redemption on Top Chef: Texas 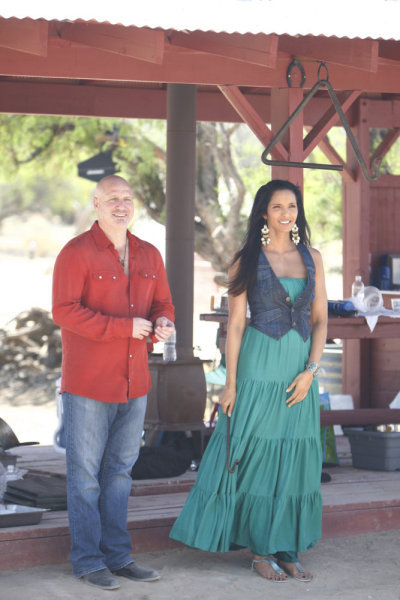 Bravo Photo by Trae Patton
Competition on Top Chef is always cut throat. From week to week the chef’testants are judged on each individual meal. So a frontrunner for most of the show, could easily be sent home following one flawed dish. But this season, in the spirit of Survivor’s Redemption Island theme, the cooks on Top Chef: Texas will be getting a second chance. In a recent conference call interview, Tom Colicchio and Padma Lakshmi talked about the new web component of the heated series.

It used to be when the judge’s didn’t like a meal on Top Chef, the only recourse a contestant had was to defend their dish. As Tom recounted his reaction to those sometimes tense moments. “Aside from getting personal, no they can defend all they want. Someone says, ‘You don't know what you're talking about.’ Great. Okay. That's fine. You're still going home. There's nothing to take offense at. If one of them stands up and says I was at your restaurant two weeks ago and it was terrible, it's like, ‘Just be quiet.’”

Still he recalled the one chef who crossed the line. “What Elia [Aboumrad] did going back to last season, she personally attacked me afterwards and so that is going too far. But even then it was just like let her do what she wants. I commented on it and that was it, over.”

But Tom added that he respects a competitor who stands firmly in their beliefs. “If you're defending yourself, please defend yourself. Please tell us why you did what you did, what you're looking for, what you were going for. That's all well and good. It actually makes for better TV when they defend themselves. And so it's okay for me. It's a personal thing, cooking, and so please defend yourself all you want. Just don't make it personal.”

As Padma pointed out, being critiqued is all part of the Top Chef experience. “In the times where I've felt someone didn't make a successful dish and they disagreed, if enough of us thinks they should go home then they go home… What helps is it's not just one of us. There are four people up there and at least three of us have to want to send them home. So it doesn't become this one on one battle between one judge and one contestant.”

She added, “They're making food for us to judge. That is the game. And I don't think any interest in belittling or insulting or hurting the feelings of any of these contestants. They sign up to go on national TV and be judged by these particular pallets and that's what's going on. End of story.”

That used to be the end of the story. Now eliminated competitors will have an opportunity to get back in the game via what Bravo is calling a “transmedia” experience. Each week two eliminated chefs will co head-to-head on Bravo.com in a challenge that will be judged solely by Tom. The last cook standing will return to the TV series for the on-air finale.

Tom explained that the chefs on the television show had no idea the web competition existed. “The contestants were completely kept in the dark, they didn't know. So I'm sure if we do it next season they'll be expecting it. But this was the first season, so we were able to keep it completely under wraps.” Lakshmi noted, “Yes they thought that they were just going home.”

As for his reaction to the concept, Tom revealed, “I thought it was a great idea… It addresses the person whom the viewer thinks got a raw deal or maybe they were more talented and they were kicked out too soon. I can think back to like Trey who was kicked out in the middle of the competition for Restaurant Wars. And he made a series of bad dishes, but everybody thought that we should have given him a break because he had competed and done well earlier in some of the earlier episodes.”

Having a shot at atonement is a sweet opportunity for the chefs. Tom admitted, “We judge on that dish and that's it. It's not a cumulative event. So you could win five in a row, if you make the worst dish, you're gone. And so what it does though, it gives that person the opportunity to get back in.”

Tom teased, “I can't say when, I can't say who. But yes whoever is the last person standing in the last chance kitchen will get back into the competition.”