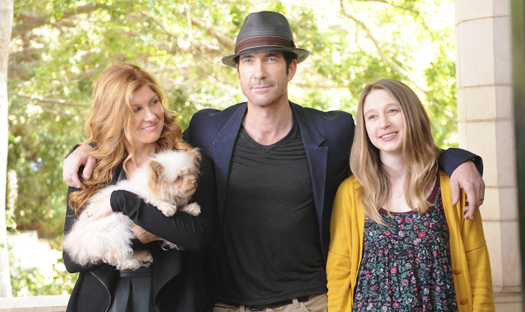 It took over one month into the fall season, but we finally have a new favorite TV series. And it's so unlike the shows we are usually drawn to. FX's American Horror Story has us on the edge of our seats, watching the gore through the tiny slits between our trembling fingers, hoping for it to be over and sad when it is. We can’t wait for it to come on week after week. We're not typically horror girls, but AHS has us hooked and were happy to hear it has already been picked up for a second season.

It comes from the genius minds of Ryan Murphy and Brad Fulchuck. Not the Ryan-Brad of Glee fame but the Ryan-Brad of Nip/Tuck fame. Yes, we know they are the same people, but clearly a team that can create the incredibly diverse fare at the two ends of the spectrum have some kind of split personality disorder. American Horror Story exemplifies the team at its best with dark, twisted, plots that keep you constantly guessing, peppered with a little black comic relief to give you an occasional chance to breathe.

We were thrilled to have the opportunity to talk to AHS stars Dylan McDermott (The Practice) and Connie Britton (Friday Night Lights) on a recent conference call. They discussed why they were drawn to the show, their theories on what's bringing the fans in and their own personal encounters with ghosts.

Both actors explained why they wanted to do the show as soon as Ryan and Brad approached them. Dylan stated, "I was instantly drawn to it. Hearing about the house, hearing about being a psychiatrist, hearing about this fractured relationship and family and the horror aspect, this Roman Polanski-esque vision of the show and Ryan and Brad and Connie and all the pieces were just like immediately intriguing to me. So I was so attracted to it and I hadn’t even read the script… And then when I did read the script and met with everybody, I was it was just a big yes for me."

He commented on the rumor that other people had been approached about the role before him. "I know that a lot of actors were afraid of the nudity and the sex and the violence of the show. But I was that guy running into the burning building as everybody was running out because I just thought it was a great concept for a TV show."


Connie, who in general is not a fan of watching the horror genre, remarked, "I wanted to do something that was really, really different from what I had just been doing. And so when I sat down and talked to Ryan, which was early on in the process, he basically presented it to me by saying, 'This is going to be like nothing you’ve ever done before.'"

She continued, "Not only that, but it was actually going to turn what I’d just been doing on its ear a little bit, so, going from this wonderful marriage on TV to this completely damaged marriage, to me that was interesting. And the style of it being so different and it just seemed like a great gift and a great opportunity for me."

Connie also was able to articulate why viewers, even non-horror fans like us, enjoy the show. "What is so brilliant about what Ryan and Brad do is that they have a very distinct vision that is so outside the box of anything we’ve ever seen before, and they have such a great talent for bringing that into fruition and that’s what they’ve done.  And audiences, even audiences who it wasn’t their natural inclination to like a show like this — are really drawn to and really appreciate being challenged and seeing something that they’ve never seen before."

Dylan noted another reason why the fan base is quickly building up. "The great thing about the show is the complexity of it. Most of the time people are aiming so low on television. They’re trying to reach that common denominator, especially on network television. And when you see a show that is so ripe and rich with all these story lines and all these questions, and it’s almost like a puzzle every week, if you were trying to figure it out."

He added, "They’re trying to figure out this story, and that’s why people are intrigued by the show is that it’s not so easy to figure out. People are smart and people really want to have something to watch that’s interesting and intelligent. And this show offers that. And a lot of television just doesn’t offer that. It’s just too easy. And it’s really the complexity of the show that makes it stand out."

And while both actors admit they are both big believers in ghosts, they each divulged inexplicable encounters they have had. Dylan described a car ride in Louisiana while shooting a movie. "The headlights washed over this ghost-like figure around midnight… I don’t know if that’s specific to Louisiana or not, but I did see this. And they did see this ethereal being suddenly, and we all just didn’t say anything for two minutes. And then, we all brought it up.   So that was the only time in my life that I actually saw something and felt things, but never saw anything before like that."

Connie also related a brush with the other-worldly beings in Italy, "I was staying at this really amazing, old Tuscan villa. It was my friend’s house. And I woke up in the middle of the night and heard all kinds of moving around upstairs above me and furniture moving and voices, and I thought that some plumbing must have exploded or whatever. And then I asked them about it the next day and they said, 'Oh, no, no, no. Nobody was up at night. Nothing was moving. Nothing was happening.' And then it came out that they were very aware that the house was haunted, and they told me all kinds of stories and the various ghosts that they’ve experienced while they’re there… I’ve been back several times, and I never, ever can sleep at night when I stay there."

We recommend you watch American Horror Story on a weekend afternoon with the windows open and the lights on. It airs on Wednesday nights at 10 p.m. EST/9 p.m. Central on FX.

For related stories check out:
Win Your Own American Horror Story
Elijah Wood Talks to a Dude in a Dog Suit on Wilfred