Lucinda Scala Quinn Gets Mad Hungry with Her Family 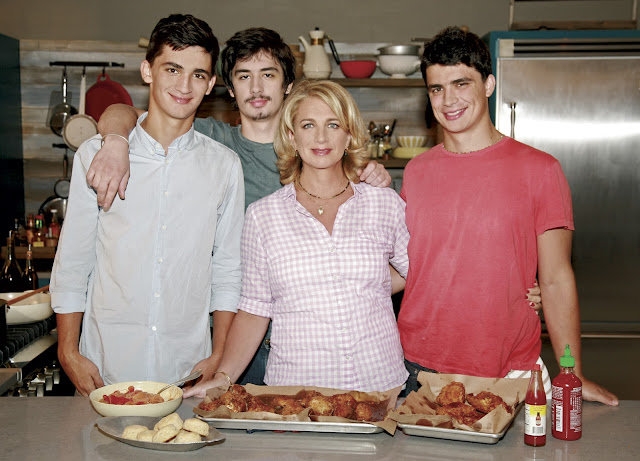 We love a good cooking show but with so many choices on TV, sometimes finding one worth watching is difficult. So we were pleasantly surprised recently when we discovered Mad Hungry with Lucinda ScalaQuinn on the Hallmark Channel. The show’s host was not classically trained at Le Cordon Bleu nor does she consider cooking an intellectual pursuit. Instead she strives for simplicity. And, most importantly to us, the mother of three looks at her skill in the kitchen as a way to connect to her sons. In a recent exclusive interview Lucinda shared her feelings on the ties between food and family.

Quinn remarked that what she wants viewers to walk away with when they see her show is “the authenticity of a person who didn’t marry a concept with a pretty face, but instead brought twenty plus years of experience, truly and honestly living what I do and what I talk about.” So much so that her family often stops by and acts as guests on the series. Quinn related that this accurately represents her life and that she is “being passionate about it and having, right there on the show, people that are the recipients of it, who’ve gained value in their own lives from it.”

With the onslaught of reality and competition shows, Lucinda clearly wants to focus more on what’s important to her. She noted, “As things get more complicated, for me I see I have a more reductive approach. I really like to look at the essence of the thing and how few ingredients can I use to nail that flavor to make me happy and someone else happy. That’s all I really have and that I really live the life that I talk about.”

From her relaxed onscreen style it’s obvious that Lucinda likes nothing more sharing her straightforward manner of cooking. In fact, when watching the series you feel like you’ve just dropped by her house and are chatting with her while she prepares the evening meal. She explained that the reason for that is very simple, “The television show is completely modeled after exactly what you’d see me be doing when I get home from work.”

This causes the occasional production issue. Lucinda recounted, “So there are times, and I really mean this, where a director will say to me, ‘Uh, where are you looking?’ And all of a sudden I’ll realize that it has morphed. Like I think I’m at home cooking dinner because there’s no affect there. It’s really the joy and the fun and the trials and tribs of getting food on the table for the people that you cook with.”

The fact that her family is actually part of her Mad Hungry team only blurs the line further. She recalled asking her son Calder to join the show after they had bonded during her 24-city book tour. “He was in between and he had decided he was going to do some freelancing. And he’s done everything from work in the kitchen to, in this last run, he was Associate Producer which was wonderful for me because it’s about our lives and he knows our lives and he keeps it real.”

He’s not the only family member to participate, however. Lucinda said that her kids “all come and go because the studio’s not so far from school. But for a large chunk of time my middle son was out here [in Los Angeles] and then he came back.”

They visit not because she insists upon it, but because they want to. Lucinda divulged, “I never make them do anything. It’s like, ‘I’m here working if you want to come by, come by.’ The same with my brothers and my cousins and whoever’s around, which is just like our homes, right? Our friends come by, our sisters come by, that kind of thing.”

Given her affinity for hanging with her loved ones, it’s not surprising what Lucinda described as her ideal meal. “It would absolutely, completely be around my dinner table with my family of five with… pasta and steamed spinach, crusty bread, bottle of wine, bottle of water.”

And it’s not as if the TV star and Executive Food Editor at Martha Stewart Living Omnimedia doesn’t have her own opportunities to dine anywhere her heart desires. But she seemed to embrace the old adage there’s no place like home. “This happens to me a lot in New York, where for work I should be at some new fancy thing and I’ll be around the table and we will be eating a modest meal. And I’ll just look around and I’ll go, ‘There’s nowhere I’d rather be than right here, right now.’ That’s really the truth.”

Lucinda added, “Especially since I’m really busy, I just love that moment. I love my home. My home is not fancy, it’s a very modest home. And I love my family. My dog always tucks himself up under my foot and that’s heaven. That doesn’t mean I don’t’ have fun elsewhere, I do. But that’s definitely my first choice.”

With all of Lucinda’s ventures it’s not hard to imagine that finding a quiet moment to relax with loved ones is a real joy. But she pointed out that she might be expanding her family business in the future. She revealed, “It’s so funny because like a real masochist, my youngest is going off to college and I’ve always said I wouldn’t have a restaurant. But I’ve been talking a lot with people who have said like Mad Hungry would be such an awesome little place.”

Her kids quickly took to the concept. “I dared to say the words out loud and then [Calder] said, ‘I’ll run it.’ And then my younger son said, ‘I would cook there.’ And then I was like, ‘Oh, is this gonna be in your future?’ And so it’s sort of exciting but also sort of frightening. But it’s exciting if it means I can be with my family, my boys. I love being with them and I love their friends.”

And it’s all in line with what was passed down to her from previous generations. “All of these things that I set out to do that I learned from my own mother, I’m starting to see come into fruition.”