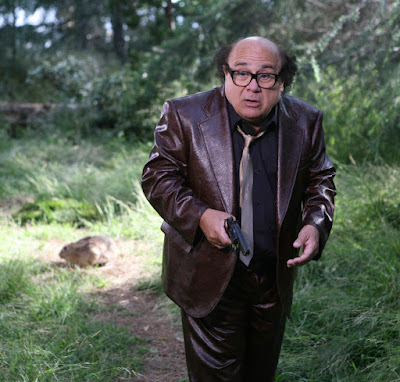 A young generation of TV viewers has fallen in love with Danny DeVito’s way-off-center character Frank Reynolds on It’s Always Sunny in Philadelphia. And many of them probably know that over 30 years ago, DeVito became a household name playing the equally dark Louie De Palma on Taxi. But in a recent conference call interview, the Emmy-winning actor compared his two classic roles.

Danny talked about the ways in which his experiences on Sunny and Taxi are similar. He admitted, “It’s the same thing, in a way, because we don’t have the live audience, but we do have really good writing. And we had great writing on Taxi. And this is from an actor’s point of view, we had a great cast on Taxi and we have a great cast on Sunny. We have people who really care about each other.”

Danny recounted a very specific example from his original hit sitcom. “I remember doing Taxi and falling in love with the candy girl who was [my wife] Rhea [Pearlman] and she was the nice girl. And everybody didn’t know why she was going out with me. I asked her and she said, ‘Everybody tells me not to go out with you. The doorman tells me not to go out with you.’ And I said, ‘Well, why do you?’ And she said, ‘Louie, you touch me.’ And I say, ‘Holy crap.’ And the standards and practices wouldn’t let us say, ‘Holy crap.’ We had a fight — she had to say, ‘Holy’ and ‘crap”’ in the same sentence. We wound up doing it, but times have changed also.”

He also compared his two iconic characters. First he described his Taxi character, saying, “Louie De Palma is the Mother Teresa — except for the fact that Mother Teresa would not put her mother in a home, just so he could have a party at her house, like Louie did. Louie’s getting a pass by being called Mother Teresa, but he had a nugget of brass for a heart. He had something in there. There were some sensibilities in there of Louie.”

Danny went on to examine his Sunny role. “Frank has it also, but he has a tenderness inside. But because of the parameters… Frank has set up for himself, where he wants to live in squalor and filth and he wants to experience everything that he never got a chance to do, that he always criticized possibly in the past. But always deep down, really wanted to do that thing where he just put on the Mardi Gras beads and go out and party all night and find somebody who he could buy to have sex with. He just never did it before. He was a business man, his nose to the grindstone. He needed that liberation. He needed that freedom and it is cathartic. It’s cathartic for Frank.”

He recalled what his Taxi character’s real motivation was, adding, “Louie got off on making their lives miserable from the cage, but he did actually care about the characters. He felt Tony Danza was this poor palooka, who could never take a punch or throw one…. He didn’t have high hopes for those characters. He knew Judd [Hirsch] was always going to be a cab driver, never get out of there. Louie was, on the one hand, having a good time making their lives a little interesting.”

As for the Sunny cast, he compared them to a couple of other iconic TV characters. “These guys are more like Lucy and Ethel, where they always have some scheme that — [series creator] Rob [McElhenney] comes in with some scheme. And this one’s got a plan and that one’s got a plan. It’s a breath of fresh air because they’re half [Frank’s] age and he gets a chance to put his foot on the running board of a wild racecar that he probably couldn’t drive on his own.”