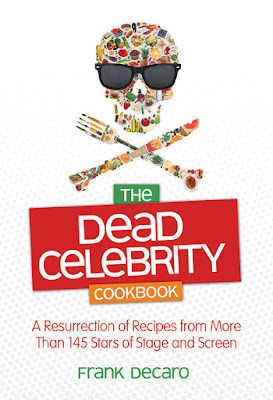 Every once in a while a pop culture idea so great comes along it makes us ask, "Why didn't we think of that?" Enter Frank DeCaro, author of The Dead Celebrity Cookbook. The writer/performer is best known as the former movie critic on The Daily Show and now hosts The Frank DeCaro Show on Sirius Satellite Radio.

In the forward to his book he admits that he has been obsessed with collecting recipes from stars who have passed away. The fascination with food eaten by entertainers who have gone to the great beyond began after a Dead Celebrities party he attended in the early 1980s. Dressed as nature lover Euell Gibbons and surrounded by friends who looked like Judy Garland, Sid Vicious and Ernest Hemingway, he realized the only thing missing was the food the stars would have enjoyed eating.

And so he began collecting cookbooks, biographies, magazines and pamphlets looking for the recipes of the stars. But what he has compiled here is more than just some cheesy white trash fare (although there is plenty of that to go around). DeCaro wraps each recipe in a history as rich as the gravy you'll be pouring on Frank Gorshin's Pepper Steak.

In the intro the author reveals why he put the collection together. "I miss those days when celebrities still had mystery about them, and a glimpse into their radar ranges seemed, for any fan, like a window into a world of glamour and excitement."


But the book is not just a kitchen companion. It is a pop culture bible. DeCaro provides more than the ingredients for Karen Carpenter's Chewy Pie. He also reminds readers of the singer's chart topping music career and the Todd Haynes film Superstar featuring a Barbie Doll in the role of Ms. Carpenter. Along with the six recipes from the legendary Lucille Ball, DeCaro furnishes a list of ten classic I Love Lucy skits where the comedian co-starred with food products.

The book features the favorite foods from the casts of The Golden Girls, Batman, Planet of the Apes and Psycho. There's also a section devoted to recipes from TV's favorite moms and comedy's funny fellows. DeCaro has left no wing of the entertainment business untouched. There are movie stars like Vivian Leigh and Katherine Hepburn, singers like Frank Sinatra and Dusty Springfield and TV cops like Farrah Fawcett and Peter Falk.

With hundred's of recipes to choose from it was next to impossible to list our favorites, but we took a stab at our top ten list:

So step into DeCaro's pop culture world and partake in his passion. "For years I've wanted others to share my fantasy of feasting on Frank Sinatra's Barbecued Lamb, lunching on Lucille Ball's Cheese-y Thing, diving ever-so-neatly into Joan Crawford's Poached Salmon and wrapping my lips around Rock Hudson's Cannoli. Really, who hasn't fantasized about that?" We must admit, we have.

For related stories check out:
Pawnee by Leslie Knope: A Must-Read for Parks and Rec Fans
Jimmy Fallon Puts His Thank You Notes in a Book