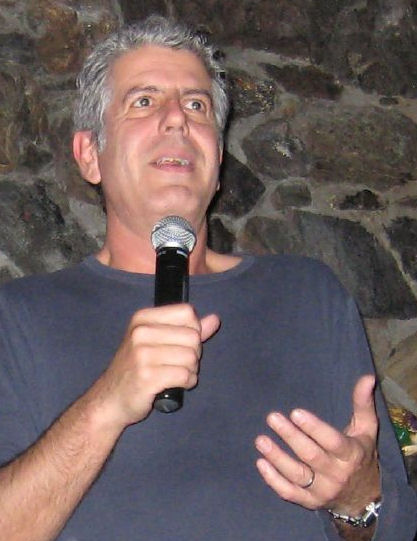 Culinary icon Anthony Bourdain isn’t one to mince words. So it wasn’t surprising that during a recent conference call interview promoting his new show The Layover, the chef turned author turned TV star was an open book. Here are ten things that you might not know about Anthony Bourdain.

1. He’d Go Dive Bar Over Five Star Any Day
“Chances are on any given day I would much prefer to be having a beer in a late afternoon in a favorite dive bar or at a family-run place… no tablecloth, not fancy, sleeping dog on the floor. It would be very hard to do better than… a local pasta in Rome or a bowl of noodles someplace in Alaska or something like that in Singapore. That's hard to beat for just pure pleasure and satisfaction, especially for a jaded guy like me. That reliably puts me in my happy place every time.”

2. He Knows Where to Go No Matter Where He Is
“I'll tell you that when we shot the Rome show, the whole crew as soon as we were headed into town, we know exactly the place we have to go to eat and we know exactly what we're going to eat when we get there. It was a very, very local thing. In a lot of ways reflective of what we're doing with The Layover because we learn stuff. We've made mistakes during the lengthier process of making No Reservations over the years. So we're pretty good at getting right to the good stuff even if it's just for us. And I guess to some extent we're sharing that now. We're sharing that hard-won information.”

3. The Layover Will Be Different than Samantha Brown’s Show
“We're very different people to start with. If things go wrong, I'll actually look at the camera and say, ‘This sucks.’ So that would be a distinctive difference. I'm not really interested in the best of the most iconic places in locations where I think most other travel shows made an effort to at least make you aware of the pyramids or the Eiffel Tower. I've gone the other direction. This is at least trying to do my own. Like anything, it's personal. Like anything I do, it's always point of view, it's always a personal essay of sorts. I’m trying to do a useful, if dysfunctional, version of that kind of show in our own sort of darkly dysfunctional way. I'm trying to be useful to the extent that I can.”

4. He Admits Some Cities Are Harder to Cover than Others
“How many L.A. shows have there been?... To do Layover, yes, it's a challenge because you're looking to do an informative L.A. show [while] trying to avoid the usual suspects. So, yes, it's hard, particularly in L.A. I have to say [L.A. Weekly food critic] Jonathan [Gold] made it a lot easier just by doing what he does in highlighting the kinds of places that he's been highlighting over the years. So Korea town was a major focus, food trucks and as [chef Roy Choi] pointed out the difference between L.A. and so many places around the other major cities is it's not European at all. The heart and soul and spine of L.A. is not Europe, which is a big difference from a lot of the other cities. And I guess I missed that. I hope that this show is a success in that I actually learn something.”

5. The Layover Will Cover More Accessible Destinations
“The Layover, these are places that any international traveler wouldn’t be likely to find themselves. But the challenge is making like Saudi Arabia or Liberia more accessible in the sense. And I think the way you do that is you sit people down at a table or you show people sitting down at a table and you relate in some way the way that I do. It takes us four hours to do a five-minute meal scene for No Reservations. That's the end result of a lot of time spent getting to know the family, playing with the kids, petting the dog and drinking the local moonshine.”

6. Travel Has Not Made Him a Better Chef
“It's taken me out of the kitchen… I think anytime you're able to see how other people live around the world, I like to think it makes you a more compassionate and tolerant person, maybe. Maybe I'm a little tiny bit smarter, a little bit more optimistic actually about my fellow man. But as a cook, if anything, it's taken me away from cooking… If it’s changed my cooking in a useful way it is seeing how much people make with very little around the world and how delicious so many cultures could make food that you wouldn't think of as being delicious again and again and again and seeing how hard people work for food and how generous they are even when they have very little. It's made me a lot less likely to waste food. It's made me a little more careful about the respect with which I treat it.”

7. What He Misses About the Restaurant Business
“I miss the first beer after being in the restaurant kitchen, that sense of triumph and camaraderie of having survived another busy night, the sense of certainty, the sense of closeness to the people you work with, of being part of this sort of cult. I miss that. But I mean, I had 28 years of it. I don’t miss standing on my feet for 16 hours, not at my age.”

8. He Won’t Be Getting Back into the Restaurant Business Any Time Soon
“I would never open a restaurant. If I've learned anything in 28 years of being in the restaurant business it's that I never want to own a restaurant. That's a marriage.”

9. He Has a Few Tips for Getting Through Airport Security
“I'm very, very, very good at going through security and I'm unflustered. I don't get cranky. I just go limp like a guy who's been to prison many, many times. I'm ready for the worst. So yes, I always wear a particular set of shoes… By the time I'm near the machine I've got my belt off, my wristwatch in my pocket. I dress for security… I'm not approaching that thing with any liquids or gels. I've got my s#*t together. I don't want to be that guy that everybody else is waiting for. But also I don't get cranky at security if it's moving slow because there's no point. Long, painful experience has taught me that, other than relax, there's really nothing you can do.”

10. He’s Suffered for His Craft
“I've been really ill twice on the show. Once was after Namibia I was not well after. There was a tribal situation. And then Liberia I was really, really badly poisoned.”