Get Your Friends Chewed for the Holidays 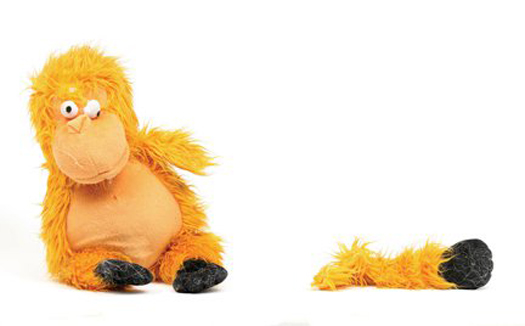 By now we've all survived Black Friday and Cyber Monday and all the silly names that have been assigned to the approximately 30 shopping days between Thanksgiving and Christmas. And if you're anything like us you have not even started your list, let alone stepped foot in any stores or ventured onto websites to purchase gifts. If so, and you know any pet lovers, we have a gift suggestion for you.

Photographers Arne Svenson and Ron Warren have turned normally discarded used pet toys into works of art in their book Chewed. They previously co-authored the book Sock Monkeys, so you already know the Passionistas are fans.

Chewed contains 140 full-color photographs of stuffed, plush pet toys as you've never seen them before. Where most animal owners see chunks of stuffing, ripped up fleece and missing limbs, Svenson and Warren saw an opportunity for art. The Chewed website states that the book is a look "at the comically twisted results of our pets' desire to tear, shred, dismember, eviscerate — to transform — their favorite toys. Each of these victims of rapturous chewing is presented in a formal yet irreverant style that considers the viewpoint of the infatuated pet."

According to the website it was their beloved sock monkey that led Svenson and Warren to start their latest book. They write, "We visited a friend and were met at the door by her dog, who presented us with a slobbery mass of yarn and stuffing: the gutted remains of a handmade sock monkey. Having spent years photographing sock monkeys for a previous book, we were well aware of their 'un-chewed' form. Intrigued that such a benign plaything had so readily become an eyeless, armless, one-legged monster, we realized that we had found our next project – portraits of chewed toys as seen through the eyes of the adoring chewer."

As the authors began artfully shooting the mangled remains, stories of pet owners four-legged friends and the objects they chew were uncovered. And so Svenson and Warren decided to approach authors to include their tales inspired by the photo sessions. Contributing writers include Augusten Burroughs, William Wegman, Isaac Mizrahi, Todd Oldham, Bill Persky and Andrew Zimmern.

A few of our personal favorite photos include, the armless orange orangutan, the what-we-believe-to-be monkey almost completely covered in duct tape except for his forehead and ears and last but not least the headless squirrel.

Read more about the book at the Chewed website.

For related stories check out:
The Dead Celebrity Cookbook
Pawnee by Leslie Knope: A Must-Read for Parks and Rec Fans