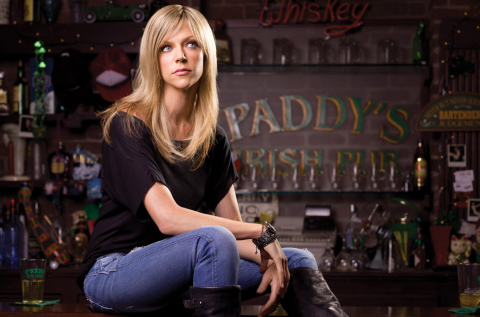 For seven seasons Kaitlin Olson has played Sweet Dee Reynolds on It’s Always Sunny in Philadelphia. Kaitlin and fellow castmates DannyDeVito, Rob McElhenney, Glenn Howerton and Charlie Day have created an immoral world full of despicable people and viewers love it. They can’t get enough of the warped, dark comedy. In a recent conference call interview Kaitlin talked about the physical comedy on the show, how far they are willing to go and how her Groundling training comes in handy.

On Doing Physical Comedy on the Sunny
"I seem to remember, only because I’m updating my reel at this point, I’m noticing all of the ridiculous physical things I’ve been doing over the past seven seasons.  Like slamming my head into a car door and all that stuff… That hurt. I needed a lot of chiropractic after that. But I definitely think that’s one thing that really makes us laugh and it’s our sense of humor — big, physical stuff. So it doesn’t surprise me that there’s more and more of it, like the inflatable dancing guy. I can’t speak for anyone else, but everyone’s always making fun of me in real life, how long my limbs are and things like that, so all of that stuff gets translated into the show. So I can see that there’s definitely a lot more physical stuff. They also think it’s really funny when I hurt myself. Anytime I’m getting hurt or you’re seeing my body do ridiculous things they’re laughing, and so they write more of it."

On How Far They Are Willing to Go
"I don’t think we’ve found it yet, for sure. If there is one, we are still looking for it. I think there’s a way to approach any subject that can either make it intolerable or that can make it funny. So we certainly weren’t saying that we think that babies dying are funny, but we spun it so that it does the same classic thing that our characters always do, which is make it about ourselves and do whatever we need to do to get ahead. And that’s funny to us."

On the Increase of Bloody Scenes
"We don’t shoot our episodes in order. We shoot in blocks. So we’re shooting a bunch at the same time and then after everything is all edited then they choose the airing order. So it just so happens that there was a lot of blood upfront in the first few episodes this year. I’m not really sure how that worked out. As we were shooting it, it didn’t really feel like it was that bloody to me. But that one scene in 'Frank’s Pretty Woman,' where Charlie’s just barfing blood all over that poor woman and then all over Danny, that really cracks me up. I don’t know if we’re trying to get bloody and gross and gory. I just think we’re trying to do stuff we haven’t done too much before… I just know that I think it’s hilarious. Bodily fluids are funny and that’s just that."


On Being Involved with the Creative Process
"I am not at all involved in the creative process. Everyone asks me if I’ve ever wanted to write an episode and the truth is in the very beginning I had some interest because I thought it would be fun. I don’t have a writing background. I have a lot of writing sketch comedy background because I did the Groundlings, but writing episodics is not my strongpoint. They do such a great job that there’s no reason that I would want to jump in and try and fix something that’s not broken at all. But that being said, when they’re breaking stories, [her husband and copstar Rob McElhenney is] always coming home and telling me about it and I’m laughing and giving my opinion on stuff. So I stand back and wait to get the scripts and then I just tweak my stuff a little bit."

On Using Her Groundlings Training
"The scripts come to me really, really funny. They work really hard on them so it belittles it a little bit when we talk about how much improvising we do. So I just want to be really clear that they just work so hard on the scripts and they’re so funny when we get them. But it keeps it fresh to be able to show up and play around with the dialogue. I think it’s really important on our show to have either a natural improvising ability or an improv background, because we do a couple of takes as scripted and then we just totally play around. It’s really important to stay open and listen to what the other person is saying so that you can respond to it rather than just everyone jumping on top of each other and trying to get something funny in. That might feel funny at the time, but that does not end up working on TV because you can’t hear what anyone’s saying. So yes, I would say that the Groundling background comes in real handy on this particular show."

Watch It's Always Sunny in Philadelphia on Thursdays at 10 p.m. EST/9 p.m. Central on FX.

For related stories check out:
Dylan McDermott and Connie Britton Talk About American Horror Story
Elijah Wood Talks to a Dude in a Dog Suit on Wilfred