An Interview with the Cast and Creator of Neverland 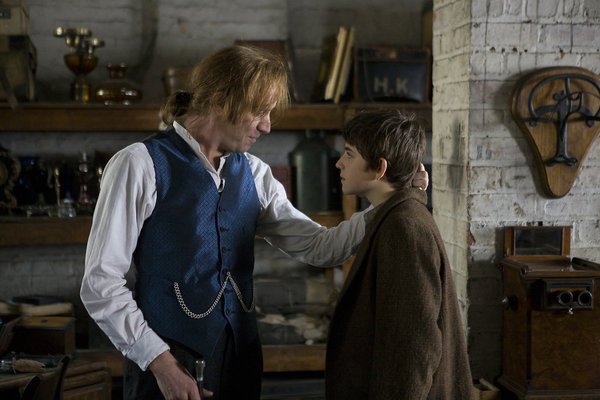 Syfy's Neverland is Peter Pan meets Oliver Twist with a touch of Pirates of the Caribbean thrown in for good measure. Writer/director Nick Willing has created the world leading up to the story we all know of the young boy who refused to grow up and the pirate he battled along the way. In the prequel, premiering Sunday, December 4 and Monday, December 5, Rhys Ifans (Nottinghill) plays Jimmy Hook, Anna Friel (Pushing Daisies) is the pirate captain Elizabeth Bonny and Charlie Rowe (Pirate Radio) takes on the role of Peter Pan. In a recent conference call interview, the three actors, along with Willing, discussed the challenges of reimagining a classic tale.

In Nick's Dickensian world Peter Pan is the Artful Dodger to Hook's Fagin. Rhys plays a fencing teacher who leads a band of young orphans in a pickpocketing ring. During one thieving expedition they happen upon a magical orb that transports them to Neverland. This is where they encounter the native tribe and a bunch of fairies including Tinkerbell, who is voiced by Keira Knightley. They also find a pirate ship helmed by Captain Bonny with the help of her sidekick Smee, played by Bob Hoskins.

It is no easy task for the actors to put their mark on such beloved characters. Rhys stated, "In Hook's case the boots that you have to fill are literally big because there have been so many Hooks and each and every one of them has worn big boots." But he proclaimed, "It wasn’t intimidating, because it was a back story… Every other Hook throughout history had been thinking of subtextually. So I just played everyone’s subtext and so and I hope they’re grateful for that. It was really hard work."

Charlie confessed that recreating the role of Peter Pan was a challenge for him. "I was hugely nervous of the fact that every single boy and girl around the world had grown up with this magical story and every boy has played with their wooden swords in the playground with their best friend being Peter Pan and Captain Hook. And so, like Rhys, we both had huge boots to fill and I was very nervous about it."


He complimented his leading lady, saying, "Anna does an amazing job of bringing her to life. Incredible. And one of the roles of Captain Bonny in our film is to be the conduit, the trigger for liberating Hook from the repressed Edwardian gentlemen that he starts out as."

Because Anna was not reimagining a beloved character, her challenge as an actress was different from her co-stars. She remarked, "When you’re given something new, it’s always exciting because you’re the first one to do it. So you’re not having to live up to any expectations or be compared to anyone who’s ever done it before."

She continued, "You can watch the Peter Pans or watch the Hooks and try and do variations on them, which in this case neither Rhys or Charlie did. They completely did their own invention of age-old characters in story telling. But for me, I always like a challenge. And I like to have things that excite me and [are] something new and a little bit of a fox to be taken… It’s always hard playing a character that people necessarily won’t like and that’s usually the job of Hook. And I think that the fact that Nick wrote a very complex Hook and gave him a back story, and where did his dark side come from and to be influenced by a woman, I thought was quite an interesting thing to look at."

One issue Anna struggled with before taking the role was the concept of a woman pirate. She recalled, "My biggest question to Nick when I accepted [the role was], 'How am I going to be believable as small as I am that I’d run this ship surrounded by these huge, massive burly men? Who’s going to take me seriously?' And Nick said, 'Go online and research female captains and pirates.' And I did and came across a wonderful one called Granuaile, who I’ve since become obsessed with. And it’s a story that we don’t know but at that time so, so many years ago, there were certain women who ruled the seas."

But standing right by her side in Neverland is a man Peter Pan fans remember for all the other tellings of the story, Snee. When Nick wrote his script he had one actor in mind for the role — Bob Hoskins. Yes, the same Bob Hoskins who played Snee in the 1991 Steven Spielberg movie Hook. Nick conceded, "To me he was the embodiment of Smee. I couldn’t get him out of my head when I was writing and I always imagined that he’d be perfect for Smee." And he admitted getting him to sign on was not difficult, "It was very easy to get Bob to do it. In fact, he said, 'Oh, good. I’ve done all the research already.' So he was really up for it."

But he said Smee's character deviates quite a bit from the genial swashbuckler fans know and love. Nick pointed out, "This Smee is… a lover of fine cuisine and he sees the lost boys as a very good, new source of fresh meat. And so he’s not quite the same Smee. I mean these evil characters are all evil. I think one of the things I wondered and thought was delicious about the book, the original book, is how Barrie made all his evil characters funny and accessible and would make jokes as they’re killing people. I found that incredibly macabre and rather delicious."

He added, "The wonderful thing about Bob Hoskins is that as soon as you see him on screen, he’s like seeing a very old friend, a cuddly old friend… He looks like this really sympathetic sweet, generous person and to make him a vicious pirate seemed totally appropriate."