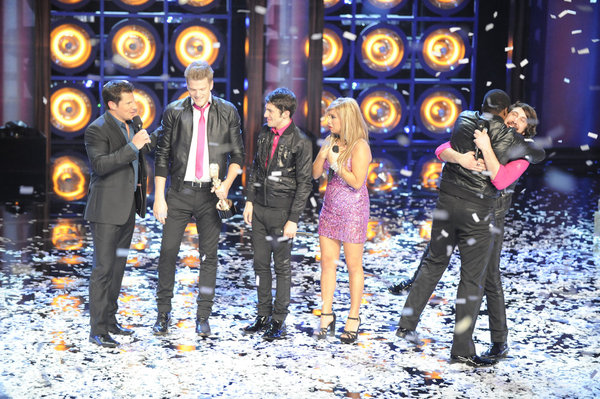 Some a cappella singers give back, a president and a rock star speak out and a working mom realizes her dreams. Here are this week's most inspirational moments in pop culture.

'The Sing-Off' Acts Give Back to Charities

Season three of The Sing-Off ended this week with the quintet Pentatonix taking the top prize. But all three final groups felt like winners when they got to give back during the last episode. The remaining acts visited local charities, shared their stories and the gift of song at a variety of organizations close to their hearts.

Pentatonix stopped by The Trevor Project, a group that provides crisis intervention and has made a name for themselves with their "It Gets Better" campaign against teen bullying. The singers created a PSA and met with kids who were feeling isolated.

On the show Mitch Grassi from the group admitted he had personal experience with bullying stating, "I was teased in middle school because of my voice." Now that voice has led him to the national spotlight, winning a major reality TV show. As he put it, "Things really do get better in big ways and you can't give up because someone tries to tear you down."

Urban Method visited The Sickle Cell Foundation to help get food for families affected by the disease and to create some crafts with the kids. The foundation is especially important to singer Kim Dawson, whose younger sister Amber has the illness. She acknowledged, "She has been through so much, more than I ever will in my life and she's still a very joyful person and so full of hope. I work hard so that she's proud of me."

Urban Method's Myke Charles is also affected by the disorder — he has a cousin with Sickle Cell Anemia. He professed, "To be able to work with an organization that hits particularly close to home makes it that much more heartfelt."

The Dartmouth Aires spent a day with Savings Strokes, a rehabilitation through golf program for stroke victims. Lead singer Michael Odokara-Okigbo's mother had a stroke this past spring so this charity was very personal for him.

He urged the participants, "I know that rehabilitation can be difficult at times but if you keep at it you'll regain a new vigorous self that you've never known before."


Posted by Pop Culture Passionistas at 10:26 AM