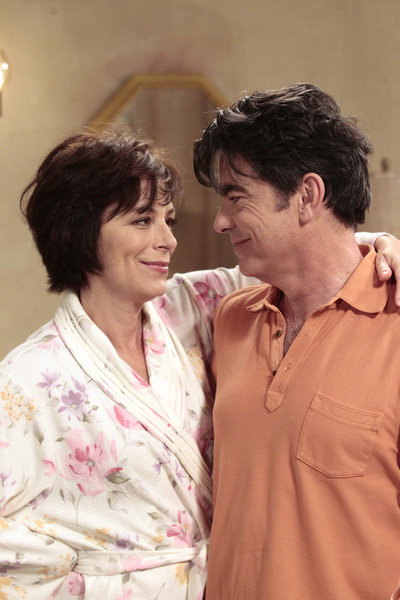 On December 8 Jane Kaczmarek and Peter Gallagher will guest star on Whitney as the title character’s divorced parents Candy and Vince. In a recent conference call interview they talked about appearing on the Whitney Cummings’ comedy and the cast’s chemistry on set.

The seasoned television pros talked about working with the show’s younger stars — Cummings and her leading man Chris D’Elia. Jane remarked, “Whitney and Chris had tremendous confidence for being that young. That relationship they have is so wonderful. Those two are so believable as being a couple in love and so delightful to watch. They can get goofy and silly but then when they have tender moments together, they’re really, really lovely.”

As a result the six time Emmy-nominated Malcolm in the Middle star confessed, “I learned a lot by watching that idea of multi-camera sitcoms and studio audiences, where you just think you’ve got to really crack it out of the park… Audiences really were appreciating the naturalness and subtlety of what they were doing.”

Jane described the roles that she and Peter play on the series, saying, “Vince and Candy are bigger than life characters — not bigger than life but certainly painted with a broader stroke. And I think that they enjoyed being able to bounce off of characters as definite as the characters Peter and I played.

So fans shouldn’t be surprised if Vince and Candy return to the show in the future. Gallagher acknowledged he’d be happy to return to Whitney, “That’s totally up to them. I had the time of my life. It’s funny, I feel like a lot of the things I’ve done over the last few years, I’ve been setting people up and so it’s really nice to get a couple of punchlines.”

He continued, “And as I say, to do so in a really supportive and lovely environment and get to sleep in your own bed at night… I was thrilled to be asked to the party. And they were very generous. So I’d jump at the chance. I loved doing Covert Affairs, and that’s also a very happy family there — a very supportive, imaginative bunch. And I would jump at the chance to do more episodes of Whitney. But that’s up to them, we’ll see.”

Jane agreed that she’d be more than happy to return as well. “I love this format. Malcolm was so time consuming, that was a single camera show, which was often 12, 14 hour days. And I had two babies while I was doing that show. I was very grateful I had it for seven years. That was a wonderful experience. But I don’t think I would be entering into that kind of a job situation again.

Gallagher concurred, “Yeah, ditto. I had a blast. I mean, just like anything else, if the people are great, you’re going to have a great time. And then added to that the chance to do comedy, with really inspired people. Whitney’s really talented. She’s a really good writer… So it was great. It was an early Christmas present.”

The Whitney episode "Christmas is Cummings" airs Thursday, December 8 at 9:30 p.m. EST/8:30 p.m. Central on NBC.
Posted by Pop Culture Passionistas at 8:57 AM