Angelina Jolie's Directorial Debut In the Land of Blood and Honey 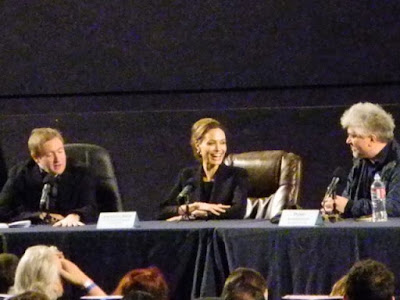 When Angelina Jolie decided to make her screenwriting and directorial debut, it wasn’t surprising that she chose to tackle a sensitive topic. But she also opted not to lean on the predictable crutch of casting big Hollywood names to ensure box office success. Instead she went to the land in which the film was based, Bosnia, and hired local actors to tell her dramatic tale, In the Land of Blood and Honey.


At a recent event at the Egyptian Theater in Hollywood, California, Angelina talked about this daring decision. “I wanted to cast from the region but I ended up just casting who happened to be the best actors. And they also happened to be from the region. And so I always wanted that. It was always going to be that. But there’s nobody that could have done this better. Nobody.”


As an added coup, the actors also helped Jolie develop the story of fractured relationships in a battle worn country as well. She recounted, “Our cast was all born Yugoslavian and shared the same history books, shared so much, shared families. And the war divided them among different lines — ethnic, religious lines — and labeled them different things. And tried, and still in some ways, tried to divide and push them into focusing on their differences.”


She continued, “But this cast, especially, is focused on their similarities and their unity and bravely came together to say, ‘We’re going to tell the story of our history.’ It’s very sensitive and it’s very difficult — more for them than for me. I was there to try to balance and listen and learn from them but they got into me through this. They taught me every day. And they have accomplished something in what they have done with this film and now that people in the region have started to see it and the dialogue it’s causing is everything we’d hoped for. So for us it was this journey.”


In addition to educating their director, the cast also rose to the challenge or Jolie’s extraordinary request —shooting the film in both their native tongue and in English. Her hope was to reach a wider audience that isn’t interested in viewing a foreign language film. Jolie explained, “We always wanted to [release the original language version]. That was the dream. But a lot of distributors and American studio people said, ‘There’s no way you’ll be able to ever get people to see a film on this subject matter, without big traditional celebrities that people know already, in a foreign language. It’s just impossible.’”


But when all was said and done, Jolie was surprised by the open-mindedness of U.S. audiences. She acknowledged, “To the credit of the America people, we screened it for them and they unanimously said, ‘We want to hear it in its authentic language.’ And so it showed me something. It showed them something — that people that tend to watch these types of films want to see something done as authentic as possible.”


Moviegoers also, it seems, like a good bittersweet story. Jolie described the film that tells a complex but not unusual tale of star-crossed lovers in the war-torn country of Bosnia. She remarked, “Unfortunately it seems very common at the time… This idea of Romeo and Juliet. They were born. They’re on different sides. They choose to be together. This couple they were born the same. [Ajla] and Danijel were born in the same hospital in Sarajevo. They’re born the same. They are the same. They fell in love at a time and a place where it was normal for there to be mixed marriages. It was embraced. It was wonderful. They had a promising beautiful future.”


She went on to talk about the tragic nature of such relationships, saying, “It was the war that turned them into enemies. It was the war that made it a bizarre or violent or… to me it’s a very sad love story because it’s a love story that would have been. And it represents the people of the country. They should be alive today. They should have a family today but they don’t. What happened to them is symbolic of happened to their country. So that is why it’s sad.”


Check local listings to see In the Land of Blood and Honey at a theater near you.

For other pop culture news check out:

The Ambush Cook Kristina Kuzmic Makes Her OWN Debut

Rosie's Back and Better Than Ever