The Biggest Loser's Lauren Lee Finds the Athlete Inside 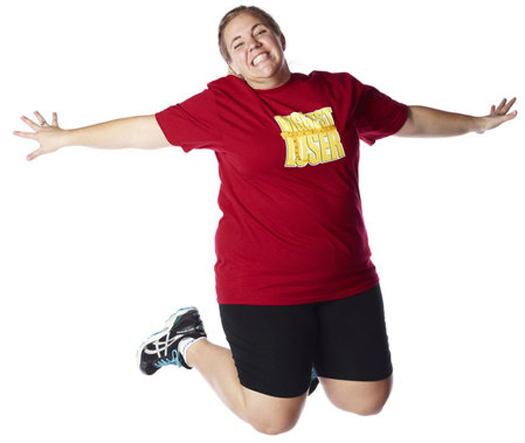 On week three of The Biggest Loser, the Red Team voted to send home Lauren Lee. The exercise psychologist from Poolseville, Maryland, who played several sports in high school and college, struggled on the ranch to find her former self. Her trainer Dolvett Quince pleaded with her to find her inner athlete. Her teammates sent her home because they knew she had what it would take to continue her weight loss journey at home. If only she could believe those things herself. In a recent conference call interview, we spoke with Lauren about finding that athlete deep inside and her routine now that she's home.

Lauren was always very athletic in high school and college. When it came time to choose a major at Marshall University she picked adult fitness. She went on to get a Master's Degree in exercise science with an emphasis on cardiac rehabilitation. So how did someone so focused on health wind up on The Biggest Loser?

Lauren explained, "Through those years that I was in college after I stopped playing sports I knew that I had just to focus on my education. I grew up being dyslexic and ADD so I had to study this education so much harder and so much longer. So instead of going to the gym and focusing on my health, I was focusing on my education. I had to go to the library and study four or five hours instead of just an hour. So through college I had to focus on myself in a way without focusing on my health so that I can get through college so that I could get the job and pay the bills and all that kind of stuff."

She and her mom, Gail, tried out for The Biggest Loser and started at the ranch together as a team. But when the pairs were split up, Lauren was left to face her past alone, despite Dolvett and others encouraging her to find that inner-sportsman. She stated, "It was hard to be on the ranch and you’re still a big girl and everybody telling you that you’re an athlete. And I just couldn’t see it because I knew where I was when I was an athlete. So it’s hard to get that in my mind that I am an athlete." But after being eliminated from the show, she gave herself a big challenge, which she achieved. She declared,  "After running that half marathon is when I really saw in myself that I can do it. And that I am an athlete."

She said that accomplishment taught her a very valuable lesson, "I learned that I need to believe in myself that I can do anything that I put my mind to."

Now that she's home, she sticks to a very strict regime. She does not spend as much time in the gym as she did on the ranch but still works out two to four hours every day. She noted, "Doing from weights to cardio and everything in between. And just trying to keep on it so that I can lose this weight and kick some butt at the finale."

As for her diet at home, she does wish she had more time on the ranch to take in extra knowledge about nutrition. But she did relate her number one lesson, "You have to write everything down, good or bad, whatever you put in your body. You have to write it down and just keep yourself accountable for what you put inside your body."

She added, "There’s temptations out there every single day — there’s that chocolate bar and the grocery store, there’s a big humungous scoop of peanut butter in the cabinet. You just have to measure everything and be accountable for everything that you eat."

Now that she's on her road to being healthy she has a lot on the horizon. "I just am looking forward to being more active and having a lot more energy. On my bucket list I would love to run a full marathon. I’ve gotten half of it so I have half a check mark, but I would like to fully check off that full marathon off my bucket list. I would like to do a lot of things — skydive, parasail — a lot of just different activities that my weight was holding me back because there was a weight limit on them."

But her first goal is to take away the at-home prize at The Biggest Loser finale. She proclaimed, "I plan on continuing exactly what I was doing on the ranch. And just keep on working out and going to the gym and eating healthy so that I can look like a true athlete on the stage at the finale."