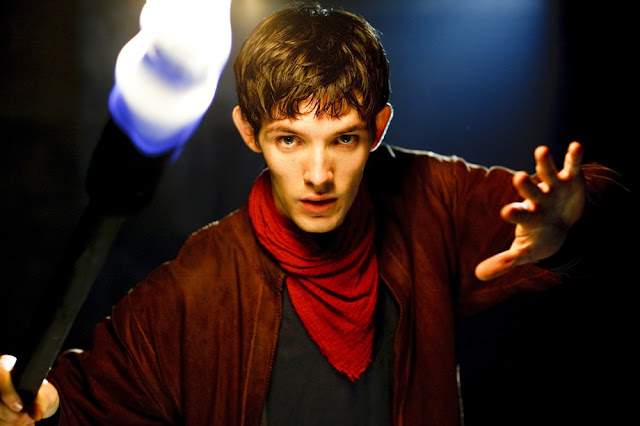 The legend of King Arthur and the Knights of the Roundtable has been retold through history countless times. Perhaps the most famous renditions may be Disney's The Sword and the Stone, Lerner and Lowe's musical Camelot and John Boorman's film Excalibur. But the Syfy series Merlin tells the tale before the legend begins. In the fantasy-adventure show we see the circumstances that brought Arthur and Merlin together in the first place. In a recent conference call interview we talked to Merlin star Colin Morgan about how the relationship between Arthur and Merlin will evolve in season four.

We asked Colin why he thinks the Camelot legend has such staying power. He replied, "It’s been retold and retold and in different ways, so you’re never seeing just the Camelot legend all the time. [It] started out as a legend then Tennyson did the poem, [then] The Once and Future King. We’ve even got the Disney version of it. We’ve got everything. It’s just been retold and retold and added to and added to. And that’s something that we’re doing as well in a fantasy setting. It seems to be a timeless topic that people constantly seem to be inspired by and moved by. It’s just a platform for a lot of different things — magic, loyalty, friendship. It covers all the grounds. And that’s something that I think works in any time, in any age."

But a constant that runs through most versions of the story of Camelot is the relationship between King Arthur and Merlin, the wizard. Colin admitted, "It’s one of the most iconic relationships in [history]." In the Syfy series, Arthur and Merlin live in a land where magic has been banned — a bit of a problem for soemone with Merlin's powers. So he hides his abilities, even from his friend, and acts as Arthur's servant. But Merlin knows Arthur's destiny to be the leader of a great kingdom and so he does what he can to nurture him and protect him — even if that means using his powers on the sly without Arthur knowing.

Colin noted that there in lies the humor of his character. "Merlin’s in the know in terms of where Arthur’s going and what [it] must take for Arthur to be in that position of that perfect king. But also the slightness of Merlin [hiding his] magic and Arthur never fully realizing that he’s got out of a situation because of Merlin. And yet Arthur regards him as the servant, the one that’s there just to carry the luggage, I suppose to actually carry the weight of the situation. And the humor comes in the fact that Merlin’s the one who probably has the biggest problem of them all. And as an audience member we’re clued into that. It's an interesting thing for an audience to watch."


But Arthur and Merlin's relationship will be tested with the addition of a new character. As Arthur's father, the current king Uther, begins to slip into madness, Arthur starts to take over some of the leadership of the kingdom. At this point, Arthur's Uncle Agravaine arrives. He becomes his nephew's advisor, leaving Merlin out in the cold. Colin said it's a big part of this season, "It’s about Merlin trying to regain that position to try to get by Arthur’s side to be there for him and to get him to make the right decisions. Because as things very quickly change and Arthur gains more responsibility and it’s exactly what Merlin should be."

But Merlin has a difficult task trying to gain Arthur's trust over that of his own flesh and blood. Colin explained, "Arthur’s raising a lot of belief in himself. And he’s listening a lot and gaining a lot of advice from his uncle… But he’s not confident in himself at all. I don’t think he feels ready. He doesn’t feel that he can make these decisions alone. He wants to make his father proud."

Colin continued, "Merlin’s trying to be there for him. Merlin’s trying to make him see that things are right. But Arthur has a stronger bond with his family, his uncle over his friend. And that’s a difficult thing for Merlin to try and overcome because he knows that regardless of circumstances Merlin needs to be where Arthur’s uncle is and that’s by his side being his most trusted advisor. And that’s a big, big challenge for Merlin this season is to try and get Arthur to accept him as well."

Merlin will also struggle this season with whether or not to reveal his magical powers to Arthur. He will need to weigh helping to save the kingdom vs. the fear of his own banishment. As Uther slowly loses his mind, Merlin will take a risk he hopes will pay off. "Certainly Uther going down the path he’s going down, it’s not encouraging and it’s not good. So Merlin does get a chance to redeem things there. And he does take his chance and for Uther, which is a really interesting decision to make, that if Uther can some way be healed or cured by magic then Arthur will believe in magic and trust in it and see it as a force for good. And that’s something that’s brought very early on in the series. And it’s a really it’s a great opportunity and Merlin takes advantage of it."

Colin summed up his character's heroics this way, "Merlin is completely focused on his destiny. He will do whatever it takes. He has to put a lot of his emotions aside. He has to not think about himself, not think in a way about his personal consequences and think about the consequences of what it will do for Arthur and for the kingdom and for the future of magic. And he has to cast aside a lot of the personal feelings in a way… So Merlin will do whatever it takes.

Tune in to the season four premiere of Merlin on Friday, January 6 at 10 p.m. EST/9 p.m. Central on Syfy.