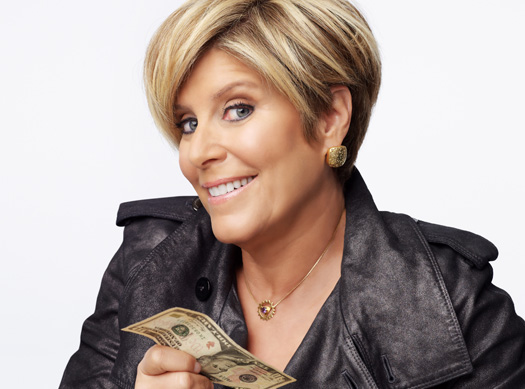 Photo by OWN: Oprah Winfrey Network

Financial guru Suze Orman has a new TV series premiering on OWN on Monday, January 9, called America’s Money Class with Suze Orman. The show, based on her book also called Money Class, is a course to teach viewers how to reach their financial goals. It provides tools and tips for people who have been struggling financially to help them get back on their feet and take control of their money.

Like any good class, there is a test at the end. After six episodes, Suze's TV students can go online to Oprah.com and take the final exam. Winners will be selected from those who pass. One viewer will walk away with $50,000, while five others will get $5,000 each — a nice start for that nest egg you've been meaning to start.

In a recent conference call interview, Suze told us who had the idea for the exam came from. She stated, "It came from me thinking, truthfully, 'What can I do to get people to pay attention?'"

She continued, "People don’t pay attention to the most important thing in their lives. They’re not paying attention to their money. So how could I get those on board that every time they think about money they get that queasy little feeling in their stomach or they start thinking, 'Oh my God, I can’t deal with it, it’s just like my life.' What could I do to involve those people into one of the greatest classrooms that has ever been presented on television?"

And the prize is not the only money being awarded on America's Money Class. Suze revealed, "You’ll see during the show, very unexpectedly, I gave money away to people who really touched my heart that had not been planned."


All of this is designed to get people to watch a show on a topic most people prefer to ignore. She admitted, "It was my idea to hopefully get people interested in watching something that sometimes can be painful for them because money touches every single race, religion, sex, tax bracket, whatever it is, money is of interest."

On the show she works with both individuals and couples to answer questions common to many of us. On our call she provided two financial tips to live by. "One of the greatest rules to change your life is if you can simply get as much pleasure out of saving as you do spending then you can really turn everything around. Even if you put money away in a retirement and you continue to spend money you don’t have to impress people you don’t even know or like, you’re going to find yourself in a situation where you have to take your money out of your retirement account to pay bills that you couldn’t stop yourself from accumulating."

For the second tip Suze advised, "You have got to live below your means but within your needs. All the time I’ve watched television you hear people saying, 'Just simply live within your means.' But no, it’s not live within your means… [If] you have a three-year-old car and you can afford a new car but your car only has 13,000 miles on it, it doesn’t matter that you can afford a new car. Drive your car another seven years if you can. So if you live below your means that then allows you to have extra money for you to save, to fund an eight-month emergency fund, to fund a Roth IRA or a retirement account, to do the things then that allow you to accumulate wealth as you get older… And if you just did that I’m telling you your entire life would turn around."

Suze is concerned for many Americans who are not heading these two mantras. She professed that she is scared people are being lulled into a false complacency by the experts who are proclaiming that the recession is over and things are rebounding. She stated, "I just happened to watch a show today, this morning, where pundits were saying that. I was climbing off the wall, up the wall. Because in my opinion what has turned around? What has changed? Nothing. People that are writing in to me via their emails, and there’s thousands and tens of thousands of them, their situations haven’t changed. So you’ll hear me say things are getting better when the people who have lost all hope have hope again."

In fact in her 2009 book Action Plan Suze predicted the economy will not rebound until 2014 or 2015. She remarked, "America has to come together as an America, maybe for the first time ever, where if you don’t have that what you deserve to have, those that have need to start working with those that don’t. And this 99 percenter thing that you hear all over the place, it’s a real. It’s true. It’s true and people should pay more attention to them because I have seen the middle class slowly but surely, in the greatest country in the world, totally be disappearing. And there is a highway into poverty and there is not even a sidewalk to get out."

She added, "People are way overly optimistic at this point in time. Everybody needs to pitch in and do what they can to help everybody. I think we need to stop blaming the people who don’t have money if it’s their fault. And I think we need to gather together and help pick one another up by everybody’s boot straps and be somebody that says, 'Look, we can do it but we’re going to have to do it for ourselves because I don’t believe anybody else is going to be able to do it for us.'"

For related stories check out:
The Ambush Cook Kristina Kuzmic Makes Her OWN Debut
Rosie's Back and Better Than Ever