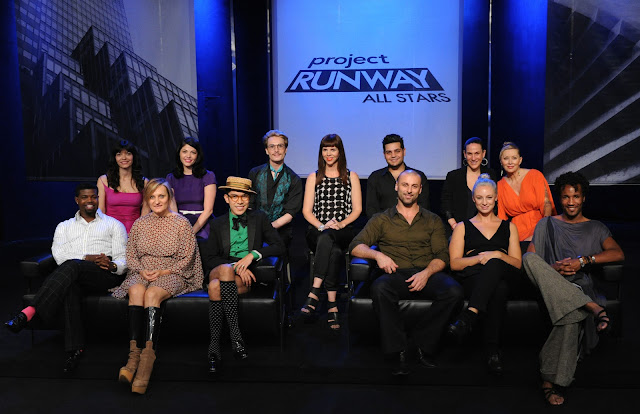 Last week on Project Runway: All Stars, season four favorite Sweet P. was sent packing. For the second week in a row, her design landed her in the bottom two and ultimately her opera dress just didn’t measure up. In a recent conference call interview, the 49-year-old from Pasadena, California, talked about her return to the runway.


Sweet P. didn’t fare well on the All Stars season. In the unconventional materials challenge, her brightly colored towel dress disappointed the judges. And in the opera challenge she admitted that maybe she took the notion of ball gown to literally. As a result her big and vibrant dress caught the judges’ eyes — in a bad way.


But Sweet P. acknowledged that she’s proud of her work. “I actually do stand by my pieces and I definitely don’t want to argue. I really don’t think I should have even been in the bottom this week.”

While she second-guessed her design part way through the challenge, she didn’t make what might have a game changing switch. Afraid that if she went with the patterned fabric for her entire frock, rather than just the skirt, her design would look to similar to that of her friend Kara Janx. So it’s not surprising which dress she picked as the best of the evening. Sweet P. revealed, “Favorite on the runway last night was definitely Kara’s. It was a ball gown. Everybody Google ball gown, just so you can see what they are.”

Sweet P. did like two dresses that didn’t match the traditional definition at all. She admitted, “I love Austin [Scarlett’s], too. I thought Anthony [William’s] dress was terrific.” Scarlett won the challenge with a tasteful gold lame creation. Anthony also wowed the judges with a low-cut, sultry white' gown that the judges dubbed “a showstopper.”


She may be out but Sweet P. was happy to pick her favorites that are still in the race. “Mondo is great. I definitely love his stuff. I loved him on his season. It’s interesting. I’m rooting for my friends that I became really good friends with on the show — Austin, Kara, Kenley [Collins]. Austin and Kenley have a really good chance of winning. Michael is really talented. And I know he’s been criticized for not going to school, but he has what it takes to be a designer. He’s really good.”

Still there are other designers that Sweet P. thought were invited to participate simply for dramatic effect. She dished on the only other eliminated competitor, Elisa Jimenez, saying, “I love her but the rest of us finished top five in our seasons and she was like number ten. So I feel like she was on there so that people could make fun of her. Because none of us were like, ‘She is on par with us when it comes to making clothes or even sewing clothes.’ That’s why I feel like there may have been a little bit… dramatic.”

Sweet P. also conceded, “I think they were maybe hoping to get some drama from Mila. But I don’t think she fell victim to that in the long run, but I went home already. I got along with Mila. She was fine with me.”


One things is for sure, Sweet P. won’t be facing drama on the runway in the future. She revealed, “I quit designing about a year ago and I went to make-up school. I’m actually doing make-up for film and television. I’ve been doing that for the last year. I love fashion. I just don’t love the business of fashion.”


Catch Project Runway: All Stars every Thursday night at 10 p.m. EST/9 p.m. Central on Lifetime.
Posted by Pop Culture Passionistas at 2:00 AM