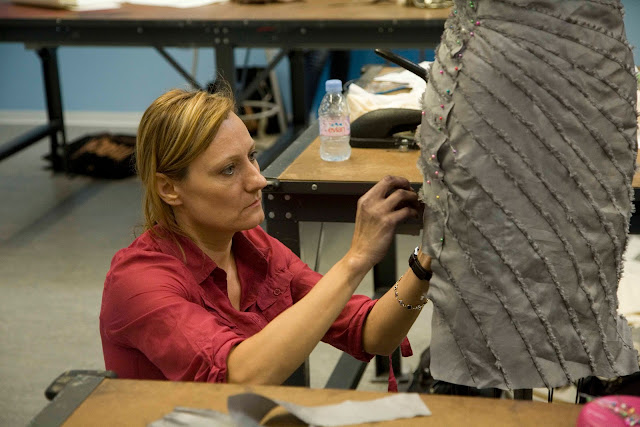 Project Runway All-Stars has reunited some of the franchise's favorite designers in a battle of fashion's best creative minds. Last week, Gordana Gehlhausen was told she was out and was asked to pack up her tools and leave the workroom. But don’t cry for the Yugoslavian-born designer. She has a thriving business waiting for her back in San Diego, California.

In a recent exclusive interview she revealed that she had hoped she would go further in the competition. But she also noted that she did achieve another personal goal on the show. She wanted to prove to older women that it's never too late to follow your dreams.

Gehlhausen said, "It is important because as a woman in today’s society, it’s so much expected from us. We are supposed to be successful in whatever we do — good mothers, good wives. If we gain five pounds, god forbid. There’s so much pressure on us from society."

She continued, "Let's say we raise the kids and send them to college. And then all at once we wake up in, let’s say, my age in mid or late forties or fifties and say, ‘Oh my god. All my life I have been giving to others and trying to nurture or whatever.’ And then everybody goes their own way and then you say, ‘What about me? Where am I in here?'"

Gordana encouraged women in this position to pursue their passions. "If you find something that you really enjoy to do but you are worried about, ‘Oh my god, am I good enough?’ It’s really important to just do something just because you enjoy doing it. And sometimes, when you have a love for something that you do, the success comes naturally with it. It’s important to remind women that our role is not over just because our kids went to college or now that our husbands are successful, and we just need to just sit home and clean and cook. Unless that’s what they enjoy to do."

The designer stated that women often come in to her San Diego shop and comment on how fortunate she is to be following her passion. She remarked, "I don’t think it’s just lucky. It’s being determined to do what you love to do. Sometimes women are scared to even try something, because they feel like, ‘Wow, there’s so much competition out there and I’m really not as good.’ But if you really go into it and give yourself a try without even judging yourself, you might be surprised by the results."

For related stories check out:
Sweet P. Falls Flat on Project Runway
Gordana Gehlhausen on Her Reason to Sign-Up for Project Runway