The Cast of Kickin’ It Talks About Their Characters 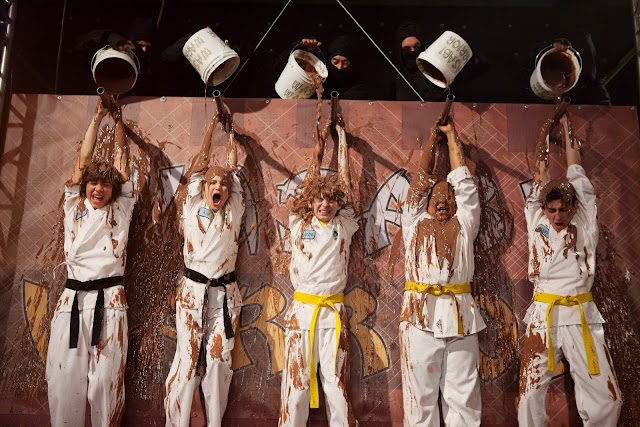 We’ve been covering a lot of teen topics lately but we have to admit that we were really impressed with the young cast of Disney XD’s series Kickin’ It. Not only are the stars polite and poised, as only kids from the Mouse House can be, but this group also knows how to take care of business. That’s because they’re all in various stage of honing their martial arts skills. At a recent press event we talked with them about how they’re like their characters.

Young Conan O’Brien look alike Dylan Riley Snyder talked about the reason the actors can all connect to their roles on a unique level. He revealed, “The executive producer, Jim O'Doherty, wrote it that way so we would have our characters close to us. Literally we would talk to him about and be like, ‘How can we make our characters more like us?’ So we worked on keeping them as close as possible.”

That’s why Dylan has an understanding of the awkward teen, Milton Krupnick. He described his alter ego, “He’s not nerdy but he’s very intelligent… But he lacks social skills and he gets confidence, that builds him up, from karate. And so adding all that together you get this little guy who can conquer anything. And that’s one of the amazing qualities about Milton.”

While Dylan could relate to Milton’s ability to gain confidence by doing what they like to do, he conceded, “[Milton] has different ideas of fun. He can go to a library and have fun. I’d rather hang out with friends and listen to music. He’d rather read vector calculus textbooks. Just differences in the way we do life, but pretty much we’re exactly the same.”

Dylan’s co-star, Mateo Arias, looks like he could play Chachi in a remake of Happy Days. The 16-year-old explained his relationship to his on-screen persona, Jerry. “I think I’m smooth with the ladies a lot of the time but I’m really not.” But he added, “Hopefully I’m not as dumb as he is. He’s not the brightest one in the group. So I really hope I’m not like that.”

The show’s only female star, Olivia Holt, was happy to play a character that’s different than most girls her age. The 14-year-old remarked, “[Kim] goes out for what she wants. She’s very kick butt and she’s a role model for girls my age and younger because she loves to hang around the guys and I feel like a lot of girls don’t really do that that often. So it’s really interesting to watch her character.”

Kickin’ It’s resident grown-up, Jason Earles, touched upon his own similarities to his role of Sensei Rudy. “We both like mentoring the kids. In real life I really enjoy helping the kids become better actors and keep their heads from growing too big as the show gets more popular. And I think Sensei Rudy’s sort of the same. He really wants what’s best for the kids and tries to figure out how to guide them appropriately.”

Still Jason admitted they had their differences, saying, “Rudy gets into way worse trouble than I do. I’m like way more overall responsible and I envision myself being a better student in real life than Rudy probably was. He was more interested in Kung Fu movies and girls than studying.”

For video of our interviews with the cast of Kickin' It visit our YouTube Channel.
Posted by Pop Culture Passionistas at 2:00 AM