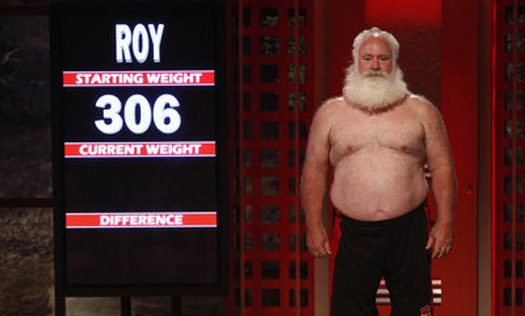 This week on The Biggest Loser Roy Pickler, better known as Santa for his snow-white beard and stout frame, was sent home. The 63-year-old from Middlebury, Indiana, was caught off guard by his teammates' vote, but grateful for the experience and happy to be continuing his journey at home.


And true to his appearance, part of what he was going back to was his work playing Santa for a local Boys and Girls Club. In a recent conference call interview, Roy told us how he got involved with the role.

He explained, "A number of years ago I was working for a company here in Elkhart and I was leading devotionals… At the same time I was at home that evening preparing for that… my wife brought up the fact that there was a Christmas party that they had in previous years and companies had offered up presents for kids in disadvantaged groups and did I have any ideas how we might be able to have a Christmas party for disadvantaged kids… I thought well maybe I could bring it up in a devotional and get some support."

And so he did. Then the people involved asked if he would play Santa for the party. He recalled, "I said, 'Well sure, I’ll do that.' And I had to rent a costume and a beard and I enjoyed it so much that later on when I was asked again to play the role I started growing my beard out and then I found out I had a curly white beard that fit the image exactly. So that’s how it all happened. It was kind of coincidental."

Sadly, this yearly costume also led to his weight gain. "That was my excuse coming onto the ranch. I could always eat because I was building the Santa persona. But on the other hand, now that The Biggest Loser has gotten hold of me and I have lost some weight, now I’m going to be portrayed as the healthy Santa. And since they have helped publicize that I’m just thankful for that and now I’m going to do a long life healthy Santa."


He explained why playing Santa is so important to him, "I love kids and that was an opportunity for me to give back a little bit to the community. Kids have too many negative distractions nowadays and it’s just my way of giving a positive intervention in their life."

He also helps kids in another capacity beyond the yearly Santa gig. He stated, "I have been involved with scouting programs for 25 years and there’s a program called Adventure Scouts for boys and girls 14 to 21. I have taken them on high adventure trips for almost 25 years and I’m going to again be restarting that group this summer when Chris gets back from her time at the ranch and then we’re going to do that together."

And now that he and his wife Chris, also a Biggest Loser contestant, have started on their path to a healthy lifestyle, Roy has advice for the kids he works with. "One of the things we heard at the ranch often was that if we had exercised at the level we were at the ranch, that any of us were at a level that we could become Olympians. So when I see young people that are able to outperform my athletic abilities I tell them the same thing — that any of them could set their sights on the goal of being an Olympian and they could do it. So I am trying to encourage people to raise their sights. They can’t achieve that unless they start early in life. So that’s my message. Let’s not only work out to stay healthy, but let’s reach for the stars. And I’m hoping I’m making the impact, I think I am."