Hal Sparks on Lab Rats, Working with Kids and Magic 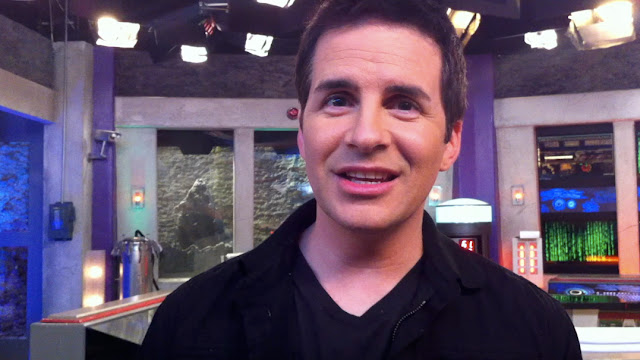 Hal Sparks has had a very diverse career since he started performing comedy as a teenager. He trained with Chicago's Second City Comedy Troupe, hosted E!'s Talk Soup, starred in Showtime's Queer as Folk, regularly appeared on VH1's I Love the… series and played Zoltan the cult leader in Dude, Where's My Car. Now Sparks is giving family sitcoms a go playing the dad on the new Disney XD show Lab Rats.

Lab Rats is about a 14-year-old boy named Leo, who moves in with his new inventor step-dad and quickly discovers three superhuman bionic teens hidden in his house. We spoke with Hal at a recent press event about playing the inventor, Donald Davenport.

He joked, "They talk about actors in the context that there's a role they were born to play. And genius, billionaire, inventor, adventure man is pretty much what I do every day. It was very simple. They were like, 'Get Sparks.' Everybody has that button in Hollywood, because I've been around long enough now that there's a 'Get Sparks' button on everybody's phone."

The "they" he referred to are Lab Rats executive producers Chris Peterson and Bryan Moore, who also created That '70s Show. Hal explained his connection to the duo. "I have an odd, barnacled relationship with That '70s Show, which I was never on. I'm friends with Kurtwood Smith. I did Dude, Where's My Car?, which was written by Philip Stark and starred Ashton [Kutcher]. This episode we're filming is called 'Dude, Where's My Lab,' and the writer who wrote it on the show had no idea I was in Dude, Where's My Car?... So it's an odd little twist… But they’re great. The nice thing is they’re aiming at a family sitcom, less a show on cable for kids."

On the show, Hal's character has one stepson and has also created three bionic superhuman kids that he treats like family. He talked about working with the young actors. He joked that they are unlike some child stars, "The other ones have been spit-polished until there's nothing left. There's no individuality. There's nothing. These kids are wacky and fun and actually have hope for the future. That's the difference between them and most children."


But on a serious note he stated, "I like them a lot, I don’t know why that is, but it's true, each one of them. It's funny being almost in a dad role because of the nature of the show, with four kids that you just met a few months ago. But already we're very much like family."

Hal gave us a tour of Donald's lab in a very assured tone that made it sound like he knew what he was talking about. He pointed out the power source, which "magnetically harnesses the earth's magnetic field and encapsulates it" and cost Donald $300. He also displayed the cellular incubator for the biotech inventions, he mentioned, "You don’t want to be out in the field when an ocular nerve goes bad and you don’t have a replacement."

Of course, being huge fans of reality TV we could not let Hal out of our presence without talking about our favorite Sparks appearance — Celebracadabra. Hal came in second to C. Thomas Howell in the search for the best celebrity magician. We told him that we thought he was robbed. He agreed.

He also acknowledged, "I'm the only one from the entire cast who still does magic." He performs at Hollywood's famed Magic Castle and he's currently building a show for Vegas, whch will incorporate magic. When we asked for details about the production he revealed it involves "turning a woman into a feline of questionable origin is pretty much what you can hope for."

He noted, "I don’t know why we keep doing that as magicians — sawing women up or turning them into jungle cats. I think there's an issue there. It's not quite Freudian. It might be Jungian… that's going to take some thought." He also divulged, "I would like to switch it up. I would like to do a dance number with a live Bengal tiger and then turn her into a girl who I'm afraid to touch."

Sounds like an interesting show for sure. But while we wait, we can watch Hal on Lab Rats, premiering on Monday, February 27 at 8:30 p.m. EST/7:30 p.m. Central on Disney XD.

For related stories check out:
Adam Wylie: The Actor Who Never Grows Up
Jessie Has a Cast of Poised Young Stars