Donald Trump Concedes He Might Have Done Poorly on The Apprentice 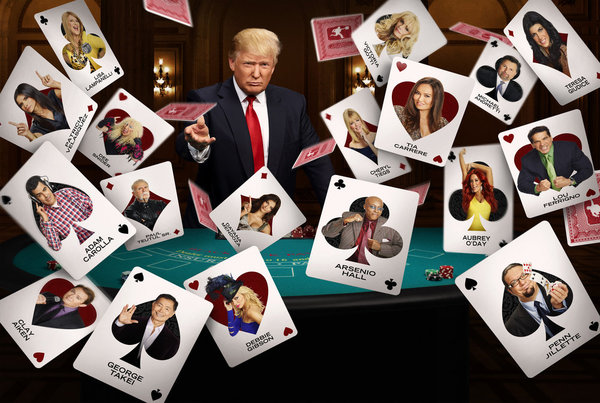 
On Sunday, February 19 Donald Trump will once again assemble a group of stars who will go head-to-head to become his next Celebrity Apprentice. Some of the famous faces are sure to turn the opportunity into career building experiences, while others might just show their true colors a little too clearly for fans' taste. In a recent conference call interview, Mr. Trump talked about the tenacity it takes to win the top prize and how the show has changed careers.

As for how he’d fare on Celebrity Apprentice, The Donald conceded, “Maybe poorly. I’m not sure I had the patience. It’s such a hard job. These people work so hard. In a way, I could never understand it, but with time I got to understand. If you look at Joan Rivers, how well she did. And I’m not even talking about people that win. I’m talking about people that didn’t win.”

He chalked the stars’ drive on the show to one thing. Mr. Trump acknowledged,  “Most people that really worked at it, amazing. And the reason is they want to protect their brand. And in certain ways, the celebrities work even harder. And these are people, and many of them of great success. They work even harder than when we just did the regular Apprentice, where frankly, you had people that weren’t celebrities and weren’t necessarily successful.”

He continued, “Joan Rivers is an example. She was 76 years old when she won. She had the stamina better than any of the athletes we had on the show and these were great, strong athletes.”

And not to toot his own horn but the real estate mogul felt the show had a lot to do with some celebrities’ rise in popularity. According to Mr. Trump, “People hadn’t heard too much about Trace Adkins, and he’s now the number one country singer and he didn’t win. Piers Morgan took over Larry King.”

But he acknowledged that being on Celebrity Apprentice hasn’t given others a boost. “Some people left poorly. Some people quit and [are] forever known as quitters. So not everybody was thrilled with having done it.”

That hasn’t stopped requests an onslaught of superstar requests that Trump said keep pouring in. The man who has no trouble telling people they’re fired admitted, “We’ve really had some tough decisions to make, and we hate to make them in many cases. Sometimes we make a decision and it’s like we hate to tell other people they’re not going to be on the show.”

“One thing I learned is that you never really know who’s going to be great... But sometimes you’re so amazed and so disappointed in some people that you have them and you see them and you meet them, and they look great and they’re dressed sharp. Everything’s great, and you say, ‘Oh, wow, they’re going to be fantastic.’ And they turn out to be a total dud. And then you’ll have some that you don’t really predict will do that well, and they turn out to be superstars. So you really see that. And that’s the thing I learned the most about the show itself, is that it’s very hard to predict who’s going to be the star early on.”

But that’s the beauty of Celebrity Apprentice and life — anything’s possible and anyone can be a star. So whether it’s a high profile athlete or an average joe, slugging along, Mr. Trump offered up some sage advice on being successful. “The harder you work the better you do. Don’t ever quit. Don’t ever give up. And that’s sort of a lesson in life. But they worked very hard. So really the harder they work, and never, ever quit or give up.”

Luckily he didn’t head the haters’ advice. “This is 12 seasons later. And it continues to be one of the great shows. I’ve had a lot of fun with it, but this is an example of a show that’s business oriented. If you think about it, it’s entertainment, but it’s business oriented — that really made it in prime time.”