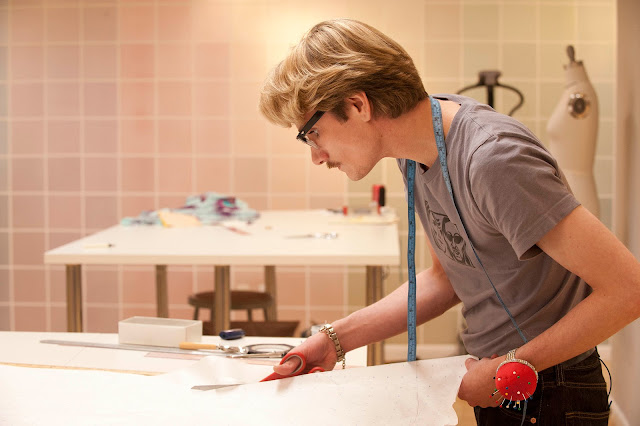 If someone asked us which movie star we’d most like to interview, we’d pick Robert De Niro or Meryl Streep. When it comes to TV, we’ve been fortunate enough to speak with two of our idols — Bob Newhart and Dick Van Dyke. But in reality TV, there was one “get” we’ve been dreaming about for a while now — Austin Scarlett. This week we finally chatted with the Project Runway All Stars runner-up about his couture aesthetic.

Austin was our favorite designer from the debut season of Project Runway in 2004. He was so talented that sometimes we have to remind ourselves that not only didn’t he win, but he came in fourth. Jay McCarroll took home the prize and Austin took the rear behind Kara Saun and Wendy Pepper — two designers we had to Google because we just couldn’t remember who they were.

For his part, Austin spun his 15 minutes of fame. His follow up series with fellow Runway designer Santino Rice, was a bit of bust but we loved it nonetheless. And his gorgeous gowns have adorned a celebrity or two during red carpet events. But we were sure that Austin would finally score a crowning accomplishment and be named winner of Project Runway.

Sadly he lost to the equally deserving Mondo Guerra. But Austin rode the Runway train all the way to the last station and reminded everyone how talented he is along the way.

In a recent conference call interview he talked about his loss, conceding, “Fashion is always a matter of opinion at the end of the day. And my fashion has a very strong point of view and that point of view may not necessarily be for everyone.”

Austin didn’t expect everyone would embrace his work based on how things went the first time around. “I remember on the first season of Project Runway, I got a lot of criticism for being high style or too focused on the couture aesthetic. But I decided back then that this is really who I am as a designer. This is what I do best. This is what people look to me for.”

He realizes that his grandiose style doesn’t necessarily fit inside the reality show’s box. He confessed, “I kind of had a feeling that they would never really choose a pure glamour couture designer on Runway. They’re more targeted to the ready to wear aesthetic, which is fine.”

Certainly Austin’s final catwalk collection didn’t look like something you’d pick up in Macy’s. According to the designer his theme was an 18th century vampire who borrows clothes from her “Hasidic dandy” friends.

But perhaps most surprisingly, it wasn’t all diaphanous gowns. There was a rock ‘n’ roll vibe that Austin hasn’t shown too often in his work. He explained, “That is really a side of me that’s always been there. People are most familiar with my purely soft and romantic looks. But I love drama. I love more of an edgy look as well, just something that pushes the envelope a little bit. Though the classical beauty is something that I will always create and love. But I wanted to have a little bit of fun with it and give more of what I thought a fashion show should be about where you’re giving something, instead of a whole new attitude, really something that hasn’t been seen necessarily before.”

Still Austin’s next project will focus on what has certainly become his signature style. He described the new project while explaining why he signed up for the All Stars season, “For me going on the show was really a chance to share my philosophy with the world. I am developing a new signature collection of evening dresses that will be coming out in the fall. So I really thought that the show would be a great way to get people excited about that. And I had fun with the whole experience.”

Season 10 of Project Runway is casting now. To find out more visit their official website.