Working with Family on Welcome to Sweetie Pies 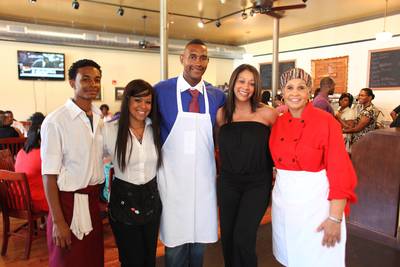 When most people find out we are sisters and we work together, the reply is typically, "I could NEVER work with my sister. We'd kill each other." But we are lucky. We have a great working relationship and agree on most things. But we are always curious how other family members get along who spend every day together in a business venture.

So we were pleased to get a chance to meet Miss Robbie Montgomery and her son Tim Norman, partners of Sweetie Pie's restaurant in St. Louis, Missouri, at a press event at the OWN offices. Viewers actually get to see their working relationship play out on camera in the reality show Welcome to Sweetie Pie's — and it is not always pretty.

In season one, we met Miss Robbie (former back-up singer with Ike and Tina Turner and current soul food genius) and her son Tim. We also got to know Tim's fiance Jenae and Miss Robbie's nephew Lil' Charles. When season two launches on March 31, there will be a new cast member, Tim and Jenae's baby T.J.

Miss Robbie confirmed that what we see is what we get on Welcome to Sweetie Pie's. "We're opening our lives and just do what we do. It's not scripted." She said there is one thing that changes slightly in editing, "I see they cut out a lot of my cursing. That's all right."

But Miss Robbie still uses her fair share of curse words. We watched the season two premiere with the mother and son with a roomful of other writers. It was the first time Miss Robbie and Tim had seen the cut. There is a scene when Tim goes behind his mother's back to do something and as she watched it unfold she admitted, "I'm pissed and I want to tell him a lot of things about that."

She went on to say, "Tim and I just fell back in love again a couple of days ago. We've been fighting for the last couple of weeks about things we disagree on. So he wasn't coming to the restaurant. I wasn't calling him. And so we weren't literally speaking."

Tim interjected, "I was on administrative leave." She confirmed, "That's right. I suspended him."


When asked about how she feels about her son now, Miss Robbie joked, "They just don't allow me to kill him. I'm too old to go to jail... We have these kids. We don't have to like 'em. We love 'em, but I can not stand his ways."

Still, despite the bickering and playful jabs, it is obvious they love each other. And it becomes even more evident when Miss Robbie allows Tim and Janae to move into her house after the premature birth of their son. Although the living arrangements cause stress, it is clear with this group that that's what families are for.

Miss Robbie recalled, "It was a hard time for us during the time T.J. came... We had to put everything on the back [burner] and start a new chapter... [We were] praying that, 'Hope this baby makes it.' Because this baby's the size of my hand and chances are a lot of them don't make. We felt with the whole world praying, with our love and support, we were there. Jenae is a fantastic mom to have this preemie. She knew everything. She was listening to the doctors. She went on the Internet. She was just on top of it."

But just don't expect her to watch T.J. too often. Miss Robbie explained, "I'm not going to babysit. I stopped having kids because I don't want to babysit. I don't mind helping out. But he's not going to move into my house with me and leave me stuck with his family. I'm not doing that unless it's death or sickness."

Miss Robbie answered, "Because he's probably cheating. He's not there. I'm there all the time."

And while both Tim and Miss Robbie certainly do their fair share around Sweetie Pie's another member of the family is still in question. Miss Robbie's nephew, Lil' Charles, the assistant manager at Sweetie Pie's, is often found out back smoking or sitting in a booth taking a break. This season Lil's Charles thinks about going back to school and trying to figure out his future.

But Miss Robbie doubted his success. "Charles does not have a clue. Charles is a piece of work. I don't know what to say about Charles. I'm praying every day for Charles that the light pops on. Somewhere in the episodes you'll see Charles at the zoo, he's at all different places. He's searching. He doesn't know. He just wants to ride and drive. That's all."

Clearly Miss Robbie doesn't mince words, but beneath the tough exterior is a loving, caring, highly religious woman who believes in the power of faith and family. She also described what sets Welcome to Sweetie Pie's apart from other docu-series. "We are a family that works in our business. I've never seen anybody work in these other reality shows. We actually work. We have our fights, but it's not physical, it's verbal. And I'm the winner. It's my way or the highway, so there's no fighting."

For related stories check out:
The Ambush Cook Kristina Kuzmic Makes Her OWN Debut