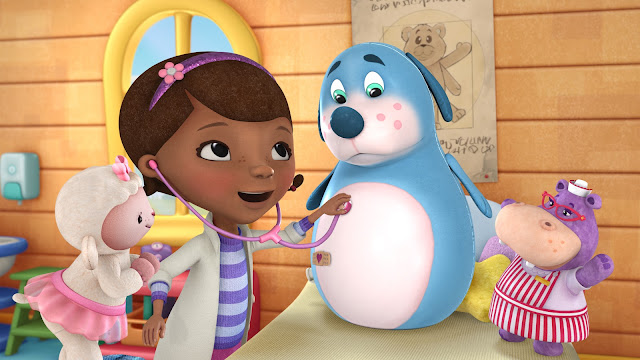 We are not children between the ages of three and seven. Nor do we have kids that age ourselves. Still we have set our DVRs to record Disney Junior's new series Doc McStuffins. The heartwarming animated tale tells the story of a six-year-old girl who runs a backyard clinic for her stuffed animals and toys.

When she puts on her magical stethoscope, her playthings come alive and she talks to them, allowing her to diagnose their conditions. In a recent exclusive interview series creator Chris Nee (Deadliest Catch, Little Bill) told us, "She is the kid who's getting to live out every kid's dream of talking to their toys, but she's also running a little ER for them."

But Doc doesn't treat plain ol' sicknesses like common colds and allergies. Instead the half-pint healer cures her patients of illnesses like the "Pricklethorns" (an inflatable toy poked by a rose bush), "No-vroom-vroom-a-tosis" (a race car that has lost his pep) or "Filthy-icky-sticky Disease" (a toy knight covered in pizza cheese and jelly). Chris stated, "Even though we're dealing with real issues, it's always got a sense of whimsy in it."

Doc has a team of friends that help her run the clinic — the cuddly Lambie, the hippo Hallie, the squeaky fish Squeakers, the clumsy dragon Stuffy and the hypochondriac snowman Chilly. They help kids become more comfortable around doctors. Chris said young viewers seem to relate to Chilly for one main reason, "It turned out kids loved that character because he's very much expressing their own fears."

Chris got the idea for the show after spending a lot of time at the doctor's office with her asthmatic son. She recalled, "It was scary for him and it was a bit of a bummer. I just wondered, 'Why hasn’t someone done the show to demystify this for kids?' It doesn’t have to be quite so scary and quite so unknown.'" And so Doc McStuffins was born. Chris pointed out, "It's not a really heavy show, but it deals with stuff that I think is going to really resonate with kids in the age group."


And Disney is the perfect network to bring Doc McStuffins and her friends to life. Chris explained, "At the time that I pitched this there was so much going on in kids' TV that was interactive. [It] wasn't favoring really strong storytelling and really unique characters and good comedy for kids... And Disney was really going after that sense of wish fulfillment and their old history of great storytelling."

She continued, "I pitched this show as wanting to do the Cheers for the preschool set, without the drinking, of course. And they really just kept supporting that."

Tune in to the premiere of Doc McStuffins on Friday, March 23 during the Disney Junior block on Disney Channel at 10 a.m. EST/9 a.m. Central and on the new 24-hour Disney Junior channel at 4 p.m. EST/3 p.m. Central.

For related stories check out:
The Cast of Kickin' It Talks About Their Characters
Adam Wylie: The Actor Who Never Grows Up