He Wants to Draw a Cat for You 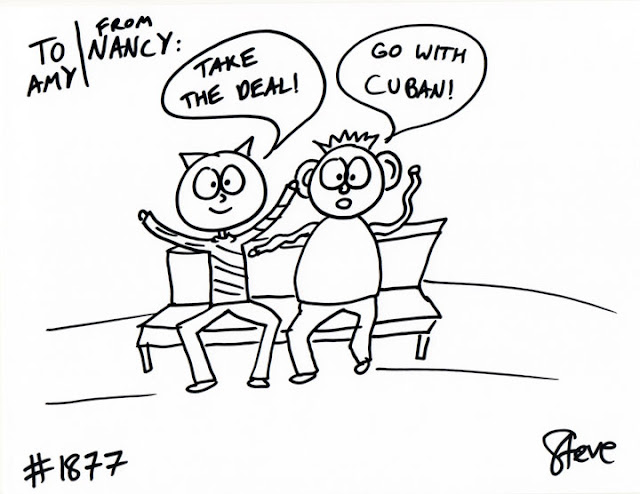 Photo by I Want to Draw a Cat for You

As you probably know by now, we're pretty heavy duty Shark Tank fans. We've always enjoyed watching the series and then a set visit last fall increased our love of all things Shark ten fold. A few weeks ago while watching the show, a man named Steve Gadlin made a pitch in the Tank that got us laughing. Steve draws stick figure cats for $9.95. Customers can go to his site, describe the cat they want and what they want the cat to be doing and create a custom masterpiece for you. And while that description may not make Steve a millionaire, his pitch to the Sharks just might.

Of course we were immediately enamored with Steve and his stick figure cats and we just had to have one. So we ordered a cat sitting on a couch with a monkey watching Shark Tank. A few days later our cat (and monkey) arrived. The plain black marker drawing on 8.5 x 11 computer paper was neatly folded into a #10 envelope and mailed to us, ready for framing.

And then, in what we're assuming was the marketing genius of Gadlin/Cuban at work, we got an email saying our cat drawing is now available on t-shirts. So all you Shark Tank fans out there can buy the above drawing in S, M, L or XL. And we get $1 for every order. Guess that technically makes us business partners with Mark Cuban, too. Who'd have thought? And so we felt compelled to talk to Steve and find out more about these darned cats.

In a recent exclusive interview we asked him where he got the idea for the company. He replied, "I'm a fountain of silly ideas with no off switch. I can't remember exactly when the idea came about, but fortunately it happened at a time where I was able to execute it. For every idea I launch, there are probably three or four others whose timing just wasn't right."

He said that his appearance on the Tank was "the result of a hastily scribbled spontaneous email."

He recalled, "For some reason Shark Tank was on my mind and I found myself on their website. I shot off a two to three sentence email to Shark Tank casting that basically said, 'Hey, I draw stick figure cats. Let me at those Sharks!'"

When the producers replied and flew him to Los Angeles to pitch to the Sharks, he assumed he was cast as comic relief. But he was not bothered by the idea of that. He stated, "I just wanted to go out there and have fun. I thought it would be great publicity for IWantToDrawACatForYou.com and my other projects and just another cool experience to add to the list."

But this is not to say that Steve doesn't take his business seriously. He revealed, "I do put a lot of stock in my own creativity and in my ability to execute and succeed with projects that others would pass on. So in the back of my head I held out hope that one of the Sharks would see potential in my style."

And one of the Sharks did just that. Self-made billionaire and Dallas Mavericks owner Mark Cuban is now Steve's business partner. He said that while the pitch was happening he did get the feeling he would walk away with money. But he also got something else that he did not expect. "What surprised me was that his offer increased the value of my company [Blewt! LLC]. And on Shark Tank you never see an offer out of the gate that increases a valuation like that. That caught me off guard."

So now he touches base with Cuban one or two times a week, which is shocking to Steve given the relatively small investment when weighed against Cuban's worth. The publicity from the show and the infusion of cash into the company has increased Steve's business and opened other doors as well.

He divulged, "Immediately following the show, every entrepreneur is slapped in the face with so many opportunities — you can barely sort them out fast enough to really take advantage. Right now I've been approached by literary agents, toy manufacturers, shirt printers, greeting card companies, etc. It's hard to say, though, if these doors will stay open long enough for me to walk through them!"

We have no doubt Steve will work his comedic magic in several areas. He said right now he's concentrating on getting his cats into comic strips and videos. He's also working to expand the Blewt! product line. He professed, "Blewt!'s mission is to create comedy to delight and confuse — be that on stage, screen or even through a bizarre retail experience. We're working to spread our head-scratching moments across the globe.

Some of the other projects Steve has in the works include Two Film T-Shirts, which creates wearable art featuring the titles of your to favorite movies and and I Want To Write a Song For You, same idea as the cats but set to music. He also has created a game show pilot called Don't Spit the Water! which aired in Chicago and that he's currently hoping to produce in 2012. In addition he has an annual stage talent competition called Impress These Apes and a ten-episode web soap opera that he said "was penned by a spammer in Nairobi, Kenya."

Steve noted, "Blewt! always has something cooking... and I'm hoping that the Shark Tank experience helps us bring our unique brand of comedy to a larger audience."

Visit IWantToDrawACatForYou.com for more information on Steve and his products and order out cat t-shirt here.


For related stories check out:
Lori Greiner Takes a Dip in the Shark Tank
Our Day on the Set of Shark Tank