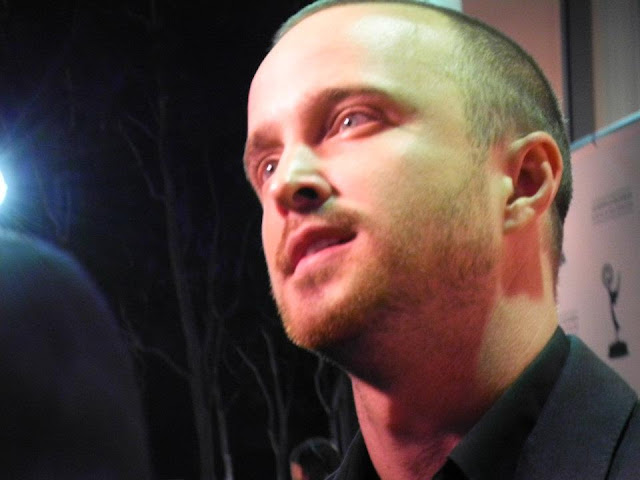 We were once again thrilled by an invite from the Archive of American Television to cover the red carpet at the Television Academy of Arts and Sciences' recent Breaking Bad event. The cast is currently on hiatus and will begin filming the fifth and final season shortly. In the meantime the TV Academy honored the groundbreaking series with a panel featuring the entire cast and the showrunner Vince Gilligan. Shockingly, there were no signs of meth addicts or a  criminals among them, but instead we encountered a group of warm, funny, generous people.

Our favorite moment was during our time wth Emmy-winner Aaron Paul, who plays meth-dealer-turned-murderer Jesse Pinkman. When we asked Aaron what TV shows he watched as a kid, we were surprised to hear these words come out of his mouth, "Wonder Years. Fraggle Rock. Blossom. What's the one with the girl that's a robot? Small Wonder! Those type of shows." He added jokingly, "I was very hardcore growing up." He admitted his tastes have changed a bit as an adult and now shows like Lost and Dexter are among his favorites.

Since Breaking Bad is coming to an end, we asked the cast to name their favorite series finales of all time. Bryan Cranston stated, "Two things come to mind. The last episode of The Mary Tyler Moore Show — I remember the group hug that they were all moving, shuffling their feet — and M*A*S*H. I guess would be the two things that I remember mostly."

Anna Gunn, who plays Skyler White and recently acted in a play by Alan Alda, also agreed that M*A*S*H was the best show ending ever. She remarked, "I remember what a big deal that finale was... [it] was such a huge part of TV history, so when the finale came it was bittersweet. You were sort of like, 'Don't go.' But at the same time it was amazing to see how they wrapped everything up."

Giancarlo Esposito, who plays Gus Fring, named The Sopranos and The Wire as two of his favorite finales because they "historically will live on beyond their years." He also added that he thinks the Breaking Bad finale will be added to that list next year.

He stated, "Knowing our writers and Vince Gilligan, especially because when you have a show that you can see an end for, the audience doesn't want that. But I think brilliant writing and truthful, honest writing demands it. So I believe that this will go down, this next season, as one of the best finales around."


For more with our red carpet interview with the cast of Breaking Bad visit the Archive's YouTube channel.

For related stories check out:
An Evening with Carl Reiner (and Dick Van Dyke)
Betty White Can Not Be Stopped