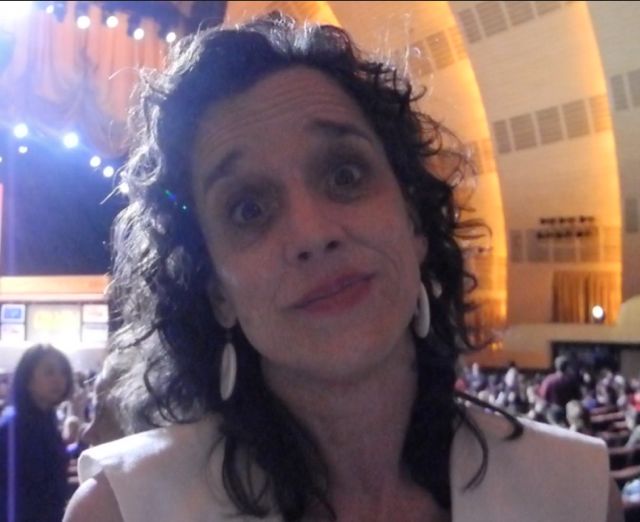 During the New York City leg of our Oprah’s Lifeclass tour, we were lucky enough to meet Ruth Kaiser. A longstanding fan of Ms. Winfrey’s, Ruth had come to see the master in person. And like many devotees, she has her own method of paying it forward.

She described how her recent offering, The Smiley Book of Colors, which features happy faces that are found in every day objects, came to be. “I started that as a Facebook project about four years ago and all of a sudden thousands of people signed up and I started getting smiley pictures from people all over the world. And it was just my little idea that if you have this in your head, then as you wander around life you just accidentally see one on the curb or you see one on a building and for that little tiny moment you feel really happy and excited and charged up. And that’s the whole point.”

Ruth believes that having a sunny disposition is a conscious decision that every human being can make. “My book is all about optimism and hope and choosing to be happy and noticing the stuff that’s good and positive in your life instead of focusing on the stuff and playing that tape loop in your head of all the stuff that’s crappy and icky and awful and yucky. Why not play the tape of all the stuff in your life that’s really great because actually your life is really, really, really, really great if you choose to notice that instead of noticing the crap. And it’s all within your own capabilities to be the person that chooses a life that’s not full of negative stuff.”

And that’s how her book came to be. On top of spreading joy in the world, Spontaneous Smiley is making a real impact on the lives of people in need via her partnership with Operation Smile. The non-profit is made up of volunteers around the globe who repair childhood facial deformities.

Ruth explained how her Internet presence is making a difference. “With our website, if you upload a picture, every time a picture comes up we donate a dollar to Operation Smile. And so far we paid for 18 surgeries.”

And the impact of the Spontaneous Smiley continues to grow thanks to the generosity of strangers. Ruth revealed, “Initially I wasn’t sure if this was going to work. So I said, ‘Okay, I’ll pay a dollar for every smiley until one surgery gets paid for. But hey guys, you’re all so enthusiastic, somebody else has got to start ponying up.’ And it was amazing because person after person came and said, ‘I’ll pay for a surgery. I’ll pay for a surgery.’ And so we’ve been able to keep it alive for several years with just individuals saying, ‘One surgery. $240? That is like nothing. I can do $240.’ And so that’s how we pay for the dollar an upload. And it’s all about, as long as you’re enthusiastic about our project, can you spare a buck? How hard is that?”

Visit SpontaneousSmiley.com to find out more about Ruth’s ongoing efforts. Go to OperationSmile.com for more information on their work.

Working with Family on Welcome to Sweetie Pie's